Back to Venus slot review

Play Back to Venus

The monstrous plant is terrorising the farm again in this comedic horror slot. But now, it’s time to send it back home.

Back to Venus is a sequel to Betsoft’s popular It Came From Venus slot. The giant carnivorous plant has been a nuisance to the farmer, who has now built himself a rocket to send the plant home.

Back to Venus was released almost exactly eight years after the first part and a lot has changed between them. This isn’t just a re-imagining of the same game, but rather a proper sequel with new ideas. Unfortunately, not all ideas were great. For example, this game is not as lively or as animated as the first one.

You are still in for an exciting adventure, where this bothersome Audrey II knock-off is getting shipped back home. Can you stay dry in the constant rain of asteroids and get the spaceship off the ground?

Back to Venus is made with the 3D-style Betsoft is known for. Though things are a bit different now, as the game was built with functionality over looks.

The first thing that pops up, is that nothing in the background is animated. The plant just stands still on the side of the screen, never moving a fibre. I found this to be disappointing, as I always loved the animated and story-driven style that made the games stand out.

Everything about the external features in this game seems to be toned down from the previous slot. The music is mediocre and the sound effects have no soul. This might be okay if the predecessor hadn’t been so vivid.

I expected so much more from Betsoft. I wanted to see how much a game can improve in eight years. Turns out that the only thing that was improved was functionality. Sure, the game is now more mobile-friendly, but it feels a bit hollow.

The carnivorous plant from Venus has taken over the farm and it's time to put an end to it. The plant and the farmer are still the best symbols, but now we get seed pods, a barn covered in vines, a UFO capturing a cow and crop circles. There are also four card numbers and two special symbols.

The most prominent special symbol is the asteroid wild. The reels are being bombarded with asteroids and you can pretty much say that there will be a wild there on every spin. The wilds are also sticky for two spins, which makes this a bit easier.

The constant barrage of sticky wilds has a cost. Because of this, the paytable is fairly weak. You will get a lot of small wins, but getting your bet back is not easy. You need to hit multiple paylines at once or get at least four high-tier symbols.

What you are aiming for, is the special features. Activating the Prickly Stick and Respin feature is a good start, but that’s not a guaranteed big hit. The Rocketship Symbol is your key to big wins.

The farmer has built himself a rocket to send the plant back to Venus, which in this game is the Rocketship Free Spin feature. This feature has great potential, even though it’s not that easy to activate. You get sticky wilds for the duration of the feature and can even get multipliers on them.

Any spin that has no wins can activate the Flowering Wild feature. You get a single free spin and the now green reels attract more asteroids. A random number of asteroids fall down on the reels, though this time they are not sticky.

The Earth is being bombarded with asteroids, which are sticky wilds. They are random and can land on reels 2, 3, 4 and 5. The vines are also sticky, so the wilds will stay on the reels for two spins.

If you didn’t win anything on a spin, then there is a small chance you could activate the Prickly Stick and Respin feature. One high-tier symbol is chosen at random and becomes sticky. Then you get to spin again and again.

The respins will continue until you win anything with the chosen symbol. You can still win with other symbols as you spin, but they won’t stop the feature.

The farmer has built himself a rocket to take the plant back. If you get at least three Rocketship Symbols anywhere on the reels, you win 10 free spins. Getting four will not increase the number of spins, but it makes the feature a bit better.

All the wild asteroids are now extra sticky. They stay in place until the end of the feature. If you got four scatter symbols, then they can have multipliers on them. Multipliers go as high as 3x and different multipliers are multiplied together.

When I first opened up Back to Venus, I was disappointed in Betsoft. This is a sequel to a story-driven slot with a lot of animation, and we are not seeing any of that here. All the plot the game has to offer is in the name.

I do understand that we are moving away from complicated and visually heavy slots. They don’t work so well on mobile devices, which is a big part of the gaming market at this point. I just think that Betsoft has now swung the pendulum to the other extreme.

And what about the game itself? It’s a decent experience that is bound to have its fans. The constant barrage of asteroid wilds and small wins is a feature some people will love. For me, it feels a bit too inadequate. Tiny wins are nice, but I found it too hard to get anything big.

I do have to give credit where credit is due. I like the special features on paper. There are some innovative ideas and they are executed well. I would just like to see them activate a bit more often.

Play Back to Venus for free

Browse casinos with Back to Venus and other slots from Betsoft. Create an account and try the game for free before making a deposit.

You can play Back to Venus in English, Finnish, Swedish, German and 19 other languages. 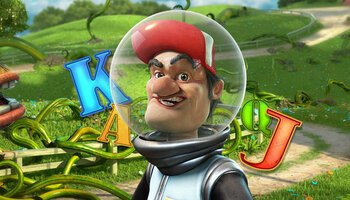