Enter the lush and leafy world of Bamboo Rush from Betsoft. A panda-themed slot with more than a few features you can shake a (bamboo) stick at. On Bojoko, you can rest assured that our reviews are never seen through those rose-tinted specs that you might encounter on other slot review sites. We don’t pull any punches and always deliver 100% candid reviews of slots.

Bamboo Rush is the first release from Betsoft’s Red Dragon suite - a division purely dedicated to creating Asian-themed slots. That said, how will Bamboo Rush fair? Will you eat, shoot and leave or find yourself dashing for another chomp of this forager-themed giant. It’s time to head deep into the mountains and find out.

While our protagonist - the giant panda does somewhat look a little dour-faced and slightly malnourished - it is still pretty cute; flappy ears and all. There’s some nice typography on display here. The Betsoft team has also certainly done their research when it comes to authentic bed music; twinkly and upbeat, it really adds to the game, giving it a bright, buoyant feel.

Character design is slightly lacking with the golden panda symbol looking less resplendent and more like the poor animal has been generously slathered in Nutella. Not something you’d want to spread on your toast; the hair would get stuck in your teeth for a start. The royals are rendered in rather cheap-looking hues that seem at odds with the other symbols. They don’t sit very comfortably, feeling off-palette, both with the game and not as potentially subject-focussed as possible.

Feature-wise, Bamboo Rush feels like a reskin of their other Chinese-themed titles such as Dragon & Phoenix or Caishen’s Arrival. If the panda of prosperity is smiling down, you could be enjoying the following features:

Land the Golden Panda (you know the one, our Nutella fella) enough times and you’ll unlock the Free Spin round, starting at 8 and climbing up to a maximum of 20. The Free Spins round follows the blueprint of the base game, with a bamboo-based bonus feature to engage and entertain.

Should you live in constant fear of repetitive strain injury or perhaps fancy knitting a panda plush toy as you play, you’ll be happy to know that autoplay is available.

There’s a mini-game thrown in for good measure - a coin toss - where you have the chance to bet half or all of your winnings. Definitely worth keeping in mind if you’re contributing towards an active bonus wagering requirement. Again, it would have been nice to have a panda on the coin, rather than that slightly creepy-looking dude.

The high volatility Bamboo Rush brings in an RTP of 96.9% with a maximum win potential of 53,208x, much higher than most other Chinese-style Betsoft products. Minimum bets start at £0.2 and go up to £20 with non-variable paylines set at 40.

Symbols of fortune, from lowest to highest, for the maximum 5 on a payline, go like this:

The massive win potential matched with a fairly substantial maximum bet could see you taking down some wins that would make even the most stoic of panda’s eyes water. If you’re garnering for some East-Asian slot action with potentially huge cash prizes, Bamboo Rush is top of the heap.

To say that Chinese-style and other Asian-theme slots are popular would be an understatement. The fact that Betsoft has dedicated an entire division to creating these games is testament to the fact that there is an existing market for this style of game.

While the team at Betsoft have yet to strike the balance between authenticity, graphics, theme, gameplay and payouts, they’re getting there slowly.

Personally, I wasn’t a massive fan of the freakily-styled golden panda and overall look of the game. They really need to do something about these glaring royals that would look more at home in an ‘80s disco playing Wham!, rather than a slot game that should portray the spirit of Chinese tradition.

Bamboo Rush’s star player is it’s gameplay but is let down by pretty sloppy graphics that could have raised this slot to the next level. Until then, Bamboo Rush will sit quietly at the foot of the mountain.

Browse casinos with Bamboo Rush and other slots from Betsoft. Create an account and try the game for free before making a deposit.

You can play Bamboo Rush in English, Finnish, Swedish, German and 22 other languages. 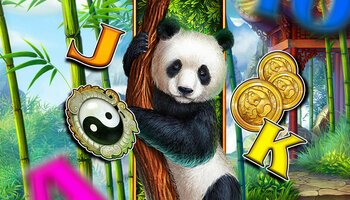