Banana Rock centres around a group of rocking apes as they make some rad jungle music in their band. The player gets to tour with them through the local bar scene as the game features re-spins, free spins and sticky wilds.

A game developed by Play ‘n GO and released in 2018, this slot shows off some impressive graphics as well as some great animations. It’s clear that the designers and developers of the slot spent extra time on its appearance as everything looks great. The game also features a few extra features that augment both the gameplay and the look of the slot which I’ll get into later.

Banana Rock uses the classic 5-reel, 3-row playing field with a minimal 10 paylines. With such a low number of paylines, it must come as no surprise that the game has High Volatility. This is compensated a bit by the different features but there is also the look and feel of the game that makes it more enjoyable to play. I think that the setting of a band of monkeys or animals playing in the jungle has been done before, but this game really goes for it.

As the game is based around a band it makes sense that the soundtrack plays a big role. We’re treated to a rocking song that plays in the background all the time, sounding suitably energetic and upbeat to feel like a song by monkeys. It does pick up an extra notch during the free spins mode, and I would have liked to have that song play the entire time. Extra sound-effects include someone singing, guitar solos for wins and the audience cheering.

Banana Rock uses a combination of original and standard symbols. The low-paying symbols are card letters created to look like neon letters, which I think fits the theme pretty well but don’t make sense in the jungle. The high-paying symbols are the different band members, each of them drawn in a cartoon style. They all have their own colour and character, and their own separate art when they turn into stacked symbols.

The game is quite animated when it comes to its appearance, with the different drums in the background constantly beating. The high-paying symbols have animations when they’re part of a win, as well as when they become stacked symbols. The Walking Wild also does some movement with its mouth as it moves across the screen, which also ties in with the soundtrack.

Banana Rock doesn’t include an extreme number of features but it does hold more than the older slots. If you’re not a fan of games that interrupt the basic gameplay constantly you will probably want to keep looking, as the features are all rather frequent.

Getting the free spins mode to activate requires getting a Scatter symbol on both reels 1 and 5. Once that happens, the game switches the playing field slightly, showing different colours at the top of each reel. Each colour is obviously associated with a specific band member. If the right band member appears on the correct reel it will become Stacked, filling the entire reel.

Banana Rock is a rocking slot that gives players something to look at while they bop their head to the beat. The way the game creates an ambience is impressive and people who enjoy a rather nonsensical and colourful setting will surely find what they are looking for here.

I did find the high volatility to be rather punishing and even though wins aren’t very rare they aren’t high enough to compensate for the losses. Because of that, my funds did decline slowly but steadily. To deal with this the game lets players pick a bet between £0.10 and £100 per spin. The game further offers a maximum win of 2,500x your bet which is nice but surely lower than most other slots with the same volatility.

In general, I had a good time playing the game but it wasn’t quite as much because of the features or the gameplay than because of the graphics and mood. If you are someone who wants to immerse themselves in a slot to pass the time, it’s a great pick. If you find the gameplay of a slot very important, perhaps other slots are more your thing.

Browse casinos with Banana Rock and other slots from Play'n GO. Create an account and try the game for free before making a deposit.

You can play Banana Rock in English, Finnish, Swedish, German and 30 other languages. 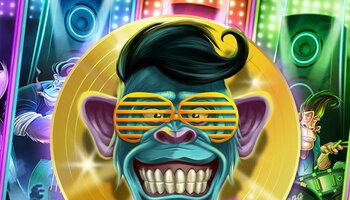