Barbarian Fury is an energy-filled fusion of Nolimit City's xNudge system of payouts and 25 paylines.

The game takes you to a cold, Nordic terrain of five reels and four rows that are a fitting home to three barbarians. These represent the high-paying symbols of the game, but the notable thing is that they are permanently expanded.

This feature is tied into the xNudge system which enables respins and potential big wins. I think this is the reason why Nolimit City has opted for paylines instead of win-ways.

Each position of the matching expanded symbol adds to the winning outcome and links with the expanded Wild - when there is one. The Wild symbol can have a major impact on the game because it has the potential of generating win outcomes of up to 4x.

Speaking frankly, I thought Barbarian Fury was meant to be filler that keeps you guessing what comes next from Nolimit City. It turns out that it's just as good as some of their most popular games.

As I expected, both volatility and max payout values are high - the latter being at 8,785x your bet.

Design-wise, Barbarian Fury packs some exciting art and visual effects. The theme screams berserk battles and blood in the snow, but none of this comes through the gameplay.

There could have been an epic edge to the overall look and feel of the game thanks to a decent soundtrack, but for some reason, the flow of the audio is interrupted on every new spin.

The thing that gets me about the gameplay is the xNudge feature. For those who know, this causes the high-paying symbols to tilt up or down their respective reel.

When three or more matching symbols are in place, the reel set rattles and shifts gets set ablaze and the mood of the soundscape gets edgy in anticipation of a big win.

Overall, I think this is a concept that most players will enjoy.

I'll just start at the top with a feature that is part of the payout mechanic. xNudge can trigger big payouts, especially when it combines with the two other features in the base game: Barbarian Respin and Roaring Wild.

xNudge can cause the high-paying symbols to shift into place, for a chance to show across the full reel. The same mechanic can also impact the Wild.

The bear represents the Wild symbol. Like the high-paying symbols of the Barbarians, the bear is also expanded and subject to the xNudge mechanic.

The difference between the Barbarians and the Wild is that each time the latter gets a nudge, it adds 1x to its total win multiplier capacity.

You can get up to three Wilds on the three middle reels and each one can accrue win multipliers of up to 4x.

In the event, your Barbarian symbols remain in place while the rest of the reel set goes for a respin.

Ideally, the matching Barbarian symbol ought to find its place on reels one, five and any of the reels in the middle. This would shorten the odds of getting one or more Wilds on reels two, three and five.

The wolf symbol represents the scatter/bonus symbol. You need three anywhere on the reels to trigger the free spins bonus, however, Nolimit City does it with a twist.

The bonus symbol is also part of the xNudge feature and works in a top do down fashion.

Because of this, it's best when at least one scatter lands on the topmost row. Every nudge to the row below is going to add +1 free spin.

Barbarian Fury doesn't pull any cheap shots when it comes to the extra features. Every single feature from the base game is also part of the free spins bonus, with an added bonus - the Wild is always nudged into full view.

Barbarian Fury has a theoretical return to player (RTP) value of 96.06% which seems just about right in view of the one-in-four hit frequency.

Note that this estimate regarding the potential winning outcomes is spread over multiple spins. Payouts-wise, Nolimit City hasn't gone out of the way to create a favourable payout structure.

All of the values on the paytable need to be seen in view of the extra features. 0.2x your bet for three low-paying symbols of the same kind is by all means meagre.

Four matching symbols also pay under the amount of your bet and this also true for the category of the high-paying symbol.

It goes without saying that Barbarian Fury is all about the multiplier Wilds and respins. In the event when these two features click together, the system can shake out a good amount of cash in your favour.

The full paytable is as follows:

I enjoyed playing Barbarian Fury for some time but I didn’t find it thoroughly engaging. The Barbarian Respin feature brought on some decent wins, but these could have been a lot more with the help of the multiplier Wild - had it arrived on the reels through the xNudge feature instead of landing fully expanded (meaning only 1x win multiplier).

I have this feeling that Barbarian Fury was intended to get slot players excited for another release which came later: Warrior Graveyard. You can play both games starting with 25p per spin, but overall, Barbarian Fury just paves the way for that other title, its killer graphics and edgier extra features.

Browse casinos with Barbarian Fury and other slots from Nolimit City. Create an account and try the game for free before making a deposit.

You can play Barbarian Fury in English, Finnish, Swedish, German and 14 other languages. 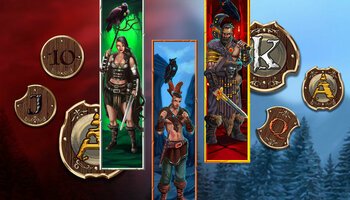