Barbary Coast is a 30-payline slot by Betsoft that can still provide thrilling gameplay even though it was released way back in 2009.

This is one of those low-payout potential games by Betsoft that has a maximum symbol value of 300x your payline bet and Return to Player (RTP) of 93.20%.

These values may seem low, however, Barbary Coast comes with five eventful extra features that can liven up the base game and help you land cash prizes that compare more favourably to those on the paytable.

Up until a century ago, the word "piracy" had a completely different meaning compared to its modern-day association. Back then one couldn't become a pirate without having a grand ship and a host of dubious characters to command in the adventurous work of looting and rumming.

We can see the latter in the game, as three of the game's bonus symbols are represented by pirates who have the tendency to square-off or drink-off in interactive bonus features that are filled with animation.

I was fond of Barbary Coast the slot game because it was one of the better games with a pirate theme. Every winning outcome results in a short animated detail for the respective symbol and to enrich the gaming experience, Betsoft has inserted a dramatic soundtrack and a useful lecture in basic pirate speak.

It's always good to have more than one extra feature in a slot game. That tends to offer a more diverse gaming experience. Barbary Coast has five feature games and each one is a story of its own.

The game doesn't have a standard wild symbol but it can post a wild reel if a single cannon symbol lands on the middle reel. It's plain and simple - you get one respin at improved odds for a win.

The parrot symbol is tied to this feature. You can land three, four or five parrots anywhere on the reel set and gain a cash prize of 60x, 90x and 150x your payline bet plus 5, 10 and 15 free spins in that order.

There is nothing special about this bonus and even though I had won it multiple times, I would have traded it for any of the other bonus features if I could.

Simply said, you get your number of free spins and no chance for a retriggering event. Also, the bonus symbols are removed from the reel set which means you can't get any of these features either.

This is where Barbary Coast starts to compensate for the lacklustre free spins bonus and lack of a standard wild symbol. This is a simple pick-me bonus game that awards you a cash prize for selecting one of the three bonus symbols. The prizes are not that great, but it's a guaranteed win.

This pirate crew has a heavy-duty worker and champion at the game of drink, but is he a match for your iron gut? The bonus lets you choose heads or tails to determine who downs the glass for that round.

If your opponent fills up first you win his stash, which is a random cash prize that is better compared to what you can win in the previous bonus.

The head buccaneer is the one you must sword-fight if you want your mutiny to be a success. Winning the bout brings a stack of gold coins, but you have to get your fighting strategy in order first.

I liked the interactivity that this bonus feature offers. You get to choose your moves before you enter the fight, which resumes in the sequence that you appoint. If the gods of war are cheering in your favour, you will take home a cash amount that is greater than that of the drinking bonus.

Betsoft has decked out this ship with 30 selectable paylines, a coin size between 1p and one pound per payline and an autoplay option. All of this is enough to fine-tune your gaming adventure. I went with 30 paylines and a sensible coin size of two pennies, which amounts to 60p per spin.

I have to be honest, the payout structure isn't overly impressive. Unlike so many Betsoft games from the same period, there aren't any symbols on the Barbary Coast paytable that can pay for two of a kind.

You can win your full wager back at 1x your bet for three of a kind starting with the fifth symbol, which is that of a flintlock pistol. The low-paying symbols (barrels, cannons, maps and compasses) can pay between 0.33x and 0.83x your bet.

There are four symbols that can pay a decent amount in exchange for four or five symbols on a payline:

Overall, I have a positive impression of the game and that takes into account the low RTP. Perhaps the paytable doesn’t have a symbol or two that can make your balance flourish from a sudden big win, but this is where the five extra features can step in.

In my experience with Barbary Coast, the triggering rate of the featured games didn’t seem low at all. I may return to play the game again if I can stave-off the strong allure of a number of contemporary pirate-themed slots.

Browse casinos with Barbary Coast and other slots from Betsoft. Create an account and try the game for free before making a deposit.

You can play Barbary Coast in English, Finnish, Swedish, German and 21 other languages. 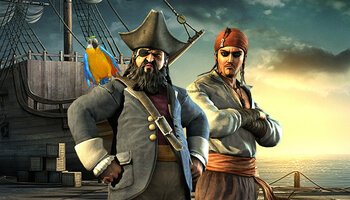