Baron Bloodmore and the Crimson Castle is a game that brings us into a mysterious castle occupied by the Baron and his unsavoury appetites. The slot further features free spins, wilds and stacked wilds to occupy the player.

This slot was developed by studio Thunderkick who have been hard at work establishing a name for themselves. With the release of this game in 2021, it shows that it can now compete with a lot of big-name studios in terms of quality and presentation. The game looks great, with a lot of colours even though the theme is vampires. That’s right, Baron Bloodmore is a vampire count that stands ominously as players play on a 5-reel, 3-row playing field.

When it comes to the actual gameplay, the slot is a lot less interesting. It prefers to offer players a rather standard experience when it comes to its features. There are a total of 25 paylines on which to get a win. Most of the symbols look great but not all of them are very inspired. The low-paying symbols are still just card letters presented as you would expect.

The background shows us the main hall of the imposing castle, and both the Baron and his concubine are slightly animated whenever they drop into the screen. The other symbols on the playing field could have used some more work to bring them alive, but the quality of the entire slot is good.

Baron Bloodmore and the Crimson Castle uses a standard collection of symbols, split into high- and low-paying symbols. While the low-paying symbols are card letters, the high-paying symbols in some way relate to the vampire theme. We have gargoyles, wolves and crows standing ominous as if they were ornaments on the ramparts of the castle. All of it is very colourful which is a nice surprise since the theme would likely facilitate a lot of doom and gloom with other studios.

The game features High Volatility which is something that players need to keep in mind. I found the slot to be relatively okay at granting smaller wins now and then, with the occasional spike. This is also aided by the different features that are included in the game, which I’ll write more about in a bit. Players can change their bet to between £0.10 and £100 per spin.

If you’re looking for a game that makes it possible to win big, this slot has you covered. The maximum win is an impressive 25,000x your bet. This can quickly ramp up, although it never felt like a possibility to me. Obviously, it’s not supposed to be easy.

When playing, the following symbols can appear:

Baron Bloodmore and the Crimson Castle keeps things pretty simple when it comes to the features that are included in the game. Players that enjoy a classic online slot will likely get the most out of this one.

During both the base game and the free spins mode, the cluster with random symbols is the most original part of the slot. This cluster appears on the middle 3 reels and will turn into a random symbol. This can be a quick way to get four-of-a-kind wins, or even more, but it depends heavily on what’s on reel 1. In my experience, this was usually not enough to trigger a win.

The other important feature in the game is the bonus game. This activates whenever the scatter symbol appears 3 times on the same spin. Technically, this will trigger the bonus game where all symbols disappear and are replaced by multiplier counters. If these counters drop onto the screen in the correct pattern, they will be added together and applied to your current bet and awarded as a coin win.

For me, the downside was that I never saw this bonus gameplay out. It never triggered during the time I played this game and I only learned of its existence from the paytable. Although it sounds interesting, my experience tells me it’s not going to be worth it waiting for it.

Baron Bloodmore and the Crimson Castle is a great-looking slot that uses colour and original art to set a theme in an original way. The character of Baron Bloodmore could have been used a bit more as he is simply a high-paying symbol now. The way the slot is named makes me suspect the studio will use him in other games as well.

The presentation is fine, even though there aren’t any big risks taken. The background is static, as are most of the symbols. Even when activating the free spins mode there is no special splash screen or small animation. It just starts the next part of the game.

Finally, the biggest disappointment is the bonus game. Although it includes a number of mechanics that aren’t found anywhere else in the slot, the fact it was impossible to activate meant it was essentially a waste of time to include it.

Play Baron Bloodmore and the Crimson Castle for free

Browse casinos with Baron Bloodmore and the Crimson Castle and other slots from Thunderkick. Create an account and try the game for free before making a deposit.

You can play Baron Bloodmore and the Crimson Castle in English, Finnish, Swedish, Norwegian 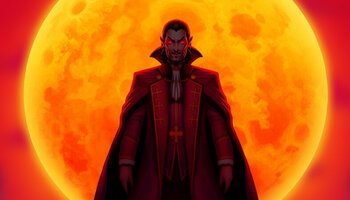