It’s time for heads to roll! In Battle Royal, it’s kings versus queens, or rather one king vs. six queens. If you didn’t guess it yet, the theme of this slot is the wives of the notorious Henry VIII.

Play ‘n GO released Battle Royal in 2018, so after 471 years since Henry’s passing the story of him and his wives was transformed into a slot game. While I wasn’t actually thinking “Well, it was about time”, I was intrigued by the theme. I am generally interested in the history of British royalty, and Henry VIII is probably one of the best-known. Sadly, it’s his marriages that people often remember him by, and not how he was as a king.

But what’s sadder is the faith of his queens. Two of them got away with a divorce, but two got their heads chopped off, and one of them died right after giving birth. The last one, Catherine Parr, outlived her husband and probably was saved by this.

In Battle Royal, the heads might fall but even death doesn’t slow down the angry queens. They want their revenge, and they shall get it!

The slot has a sense of dark humour, with all the heads rolling around and the king exclaiming “cool” as he finds treasures in the dungeon. I love how each queen has been drawn so that they actually are distinct characters, and not just copy-pasted faces with different colours.

The king himself has clearly been modelled by the painting of Henry VIII, made by Hans Holbein the Younger. In the game, he has the same puffy cheeks, big round belly, and a wide grin on his face.

I very much like the graphics of this slot, especially during the features. The ghost wives look amazing, with the eerie glow around the symbols, and two of them even have their heads floating separate from the bodies. Loving the details here!

The music is okay. A bit too repetitive maybe, but otherwise, it fits well with the theme.

There are five reels, three rows and 20 paylines in the slot. The winning combinations are calculated from left to right, and the symbols need to be on the adjacent reels. So no surprises there. But, the highest paying symbols and the Wilds are twice as long as the other symbols in the game.

The wagers are fixed, so there’s not very much you can do about setting a certain bet per payline. The pre-set bets start from 20p and the maximum bet is £100 / spin.

During the free spins, the queens can transform into ghosts, in which case they’re also Wilds and have a better payout.

Royal flush converts all suits to the same symbol. It occurs randomly in the base game, and the new symbol can be either high or low-value.

In the free spins, heads will roll! Before the free spins start, you get to choose one queen that you think will be the last one alive. Guess right, and you’ll win the bonus cash prize.

During the feature, each reel is transformed into a guillotine. After each round, one guillotine will fall at random. If there’s a queen on the said reel, she loses her head and dies. But she is not removed from the game - instead, she turns into a Wild ghost!

The spins last until just one queen remains alive. The last step is to see if she will survive the guillotine, too. The player then selects one of the reels, and the queen is placed there. If the guillotine of that reel drops, the queen is beheaded and the player advances to the Long live the King! bonus game.

All the queens of Henry VIII have died. Enraged, they’re seeking revenge for their unlucky destinies. The king finds himself locked in a dungeon with six chests, and one of them has the key.

Every chest in the bonus game has a cash prize. Until you find the key the dungeon door stays locked, and the ghosts of the ex-wives try to get Henry. When, or if you manage to find the key, you will get two options; either stay and search for more treasures or walk out and get a mystery multiplier.

Even if you choose to stay in the dungeon, you are able to leave whenever you want. But the only way to get the mystery multiplier is to walk through the door - if one of the ghosts catches the king, you’re only left with whatever you found in the chests.

The features are absolutely the best part of Battle Royale. I really like the free spins feature, and it’s always exciting to see which queen manages to avoid the sharp blade of the guillotine. The RTP of the slot isn’t too shabby but due to the volatility being high, it might take a big chunk out of your wallet before giving even decent payouts.

In conclusion, I do like this slot, but in the long run, it can get a tad boring if the features just don’t activate.

Browse casinos with Battle Royal and other slots from Play'n GO. Create an account and try the game for free before making a deposit.

You can play Battle Royal in English, Finnish, Swedish, German and 30 other languages. 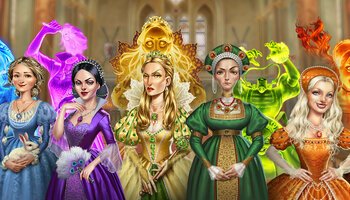