Beasts of Fire doesn’t just introduce us to the animals of North America but shows us what might happen if a meteor strikes the earth. This slot includes some of the most famous beasts of America while granting us free spins, re-spins and expanding reels.

Developed by studio Play ‘n GO and released in 2021, this game is one of a few that shows the developer’s current approach to its slots. Even when booting it up it becomes clear that there has been a lot of time and effort put into the design of the game. Besides that, the game gives players enough to look at without being distracting.

The base game has a playing field of 5 reels. Reels 1 and 5 are 3 rows high while the other ones are 4 rows high. As a result, players can get wins on one of the 576 paylines. The playing field can expand so players can hit one of 12,348 win lines instead. The game uses the consecutive reels mechanic to calculate wins, meaning the symbol appearing on consecutive reels is enough to trigger a win.

To set the scene, this slot uses the image of snowcovered mountain peaks in the background. There are some subtle animations here of drifting storm clouds and falling snow. However, most of the movement is on the reels themselves. Although set in North America, the game strangely uses Oriental-sounding music to accompany the game.

Beasts of Fire quite obviously draws a lot of inspiration from different animals. These take the place of high-paying symbols. Unfortunately, the low-paying symbols are the usual card letters. They feel quite out of place in the setting. It makes me wonder if the designers couldn’t have come up with something more engaging.

When it comes to difficulty, the game has High Volatility. I found that this mostly shows during the game by not granting any wins in general. They do occur but they are infrequent. It does help they are often quite big, compensating for the time without any wins. There is an RTP of 96.24%, which is above the average and gives the player a bit more of an edge.

Players can adjust their bets to manage their funds better. This way both casual players and high rollers have the ability to enjoy the game in their preferred way. The slot lets you pick a bet between £0.10 and £100 per spin. There is also a massive jackpot of max. 25,000x your bet. It’s definitely a payout everyone will be going for but likely only reserved for a very small number of people.

In the game, you can find the following symbols:

Beasts of Fire includes a few features that will change the gameplay in different ways. They can work very well together but often they only operate one at a time. This diminishes their effect a lot.

A quick overview of the features first:

For me, the most interesting feature listed here were the re-spins. This is symbolized by a fiery meteor crashing onto reel 3. When this happens the game will expand the playing field by 1 row for each reel. If the player gets a win during the re-spin, it will again trigger a re-spin and add another row. This can happen a total of 3 times.

With the combination of the consecutive reels mechanic, increasing rows does help the player get more wins. I did manage to hit the maximum height of the playing field because of this. The payouts are also quite good, meaning players are likely to make back their previous spins.

Beasts of Fire somewhat lacks a coherent setting on which it is based. The North American animals seem obvious enough but the inclusion of a meteor and fire beasts doesn’t quite fit in. Similarly, the use of more Eastern-sounding music makes the theme feel quite messy. None of this takes away from the presentation, however.

Players will likely enjoy the features if they are prepared to spend most of their time in the base game. Scatters are rare and activating the free spins mode did not happen often. Fortunately, all of the features are present in the base game as well. This means they can enjoy the re-spins and expanding reels.

If you’re looking for a pleasant but pretty standard gameplay experience with great graphics, this slot might be in your wheelhouse. The features will likely already be familiar to you. The jackpot can definitely act as an incentive for most people.

Play Beasts of Fire for free

Browse casinos with Beasts of Fire and other slots from Play'n GO. Create an account and try the game for free before making a deposit.

You can play Beasts of Fire in English, Finnish, Swedish, German and 30 other languages. 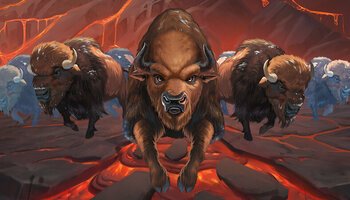 Very good and helpfulness when you need anything