Beef Lightning Megaways brings players to the farm where they are greeted by a large number of cows. These cows spend their days taking part in a megaways slot with cascading reels, stacked wilds and a free spins mode.

This slot was developed by Big Time Gaming and released in 2021. The game felt very familiar to me as soon as I started it up, especially considering the art style. It all looks rather simple but when taking a closer look I noticed the details. The game is built around 6 reels that each have variable rows. Every spin, each row will have between 2 and 7 rows. This means players can win on anywhere from 64 to 117,649 paylines.

The game does a good job at portraying a farm, with a big sign you’d find above the entrance in America. Meanwhile, we can see rolling green fields and a barn in the background. The appearance of the symbols themselves is also clearly inspired by the setting. The high-paying symbols especially look good. I wasn’t as impressed by the lower-paying symbols, since they have been used in many games by this developer.

When playing the game, players hear an upbeat song that sounds like someone hitting a cowbell over and over. There are also some strange laser sounds. It does meld together which creates an upbeat, fun tune. Other sound effects are standard, from the sound of wins to the symbols exploding and dropping down.

Beef Lightning Megaways takes its inspiration from the farm and we see that setting get carried through in the symbols. All symbols have a wooden backboard like the side of a barn, while the high-paying symbols show us various items as well as different cows poking their heads through. The low-paying symbols are the usual card letters that we are already familiar with. All of it is rendered in 3D, making it seem somewhat too smooth.

The game offers players the ability to pick a bet between £0.1 and £10 per spin. This can help deal with the High Volatility. Normal players should consider lowering their bets while high rollers might profit from maximizing theirs. I found the game to be quite tricky in awarding wins. Even with lower bets, my funds continued to drop quite steadily.

While playing, players can expect an RTP of 96.43%. This is about average for a slot with this volatility. There is a maximum win of 56,000x your bet. Obviously, that is huge. Even when considering the lower maximum bet, that will still beat a lot of other video slots when it comes to the biggest prize. Considering the Megaways feature, most players won’t get anywhere close to this, however.

Beef Lightning Megaways has a number of different features that keep the gameplay interesting. Most players will be familiar with them:

Most of the game takes place in the base game as I found it extremely hard to activate the free spins mode. In fact, it took me almost 30 minutes to have it trigger once which is obviously a very low number. There is no real way to tell if this was just unfortunate on my part, but by the number of Scatter symbols on the screen I would say that most players can expect this.

Once the free spins mode is activated, a lot of extra features are activated. Players will be able to get a multiplier on their bet, win the jackpot as well as receive additional free spins. The best addition for me was the Cow Auction. During the free spins mode, players collect multipliers that are then applied to the cow symbol. Depending on the size of your bet, this can become a substantial amount.

Beef Lightning Megaways offers players a quite enjoyable experience even though it doesn’t seem to want to try doing a lot of new things. The game looks good, with the setting sufficiently used to make the slot looks different from other games. Especially with Big Time Gaming, I feel that it is important since they often use similar art.

The gameplay was what most players would expect from this type of game. The megaways functionality helped trigger the occasional win although I felt that the high volatility was especially punishing. The cascading reels barely ever helped in creating additional wins.

My biggest problem with the slot was the difficulty with which to enter the free spins mode. Players will only rarely see any Scatter symbols, making activating the special mode more a test of endurance than skill.

Browse casinos with Beef Lightning Megaways™ and other slots from Big Time Gaming. Create an account and try the game for free before making a deposit.

You can play Beef Lightning Megaways™ in English, Swedish 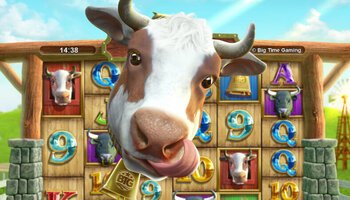