Beowulf details the saga of an ancient hero that defeated a monster before becoming a king in what is now part of Sweden. The slot brings players along with this epic poem while allowing them to play with free spins, re-spins and wilds.

This slot was released in 2016 by Pragmatic Play and as with most older slots, its graphics have begun to look somewhat outdated. The symbols are all drawn by hand but they don’t really catch my eye the same way newer art does. The 5-reel, 4-row playing field offers plenty of room for the different symbols but they aren’t all as detailed as the characters in the slot.

We can see a storm hit a castle in the middle of the night, but this background is completely static and mostly hidden by the playing field. Meanwhile, the symbols themselves aren’t animated much either, with only Beowulf appearing as a stacked symbol during the re-spin mode showing any movement at all. The game has 40 paylines and getting a win on any of them will only show the win line and light up the tiles involved.

With regards to the sound, the game feels very toned down. There is barely any music playing in the background during the base game, but the quality of what is it is fine. It sounds like period-appropriate music that doesn’t distract too much. In contrast, the sound effects are a lot louder but don’t fit the setting at all, playing happy jingles or loud alarms.

Beowulf has a series of high-paying symbols that obviously relate to the saga in some way. Beowulf himself takes a prominent role as the main symbol during the re-spins mode but he is not the Wild. Then it also features two other characters who I had to guess were Hrothgar the Danish king that needs Beowulf’s help, and Wealhtheow his wife. For some reason, none of the enemies Beowulf fights is part of the slot, including Grendel and Grendel’s mother.

Despite the game featuring a Pays Both Ways feature, as well as a re-spins function and relatively high payouts the game still has High Volatility. In my experience with the slot, wins aren’t that sparse but they are frequently too low to be helpful and as a result, my funds tended to dwindle. Players can deal with this somewhat to lower their bets, striving to keep playing until they hit a rare big win.

To do this, players can choose a bet between £0.40 and £200 per spin. High rollers can obviously pick a bigger bet to see if they can carry that to the end. The max. win of 2,500x your bet is actually quite low for such a volatile game, but even half of that would obviously be a nice win for most players.

Beowulf doesn’t have too many features when compared to some other slots but they do offer some interesting changes to the gameplay. The features you’ll find are:

The base game is very simple and only has the Pays Both Ways and Wilds features active. These function as you would expect. Even though the game has a rather large number of paylines, I didn’t find the pays both ways functionality to trigger all that often and it was only occasionally helpful in getting a win.

The Wilds are a bit more common but they still aren’t guaranteed to help create a winning bet line. This also plays into the fact that the game has high volatility, and it might take a while before any Wild helps create a win.

Where it gets interesting is when the Beowulf symbol appears stacked on reel 1. When this happens, the re-spin functionality is activated. Players will see all other symbols disappear and only the Beowulf symbol remains. The re-spins feature activates and will spin the reels, potentially adding extra Beowulf symbols to the playing field. When that happens, another re-spin is triggered. If a spin doesn’t add another Beowulf, the feature ends and the player receives a coin win.

In contrast, the free spins mode operates like the regular game. The only difference is that there is a multiplier that is active when the player gets 4 or 5 scatters on the screen. It is more likely to activate this mode with only 3 scatter symbols, in which case no multiplier is active.

Beowulf is graphically a slightly outdated slot, with flat graphics that don’t show a lot of character. They are done well and they look good on their own, but compared to more modern games they lack some creativity. There are no animations either, which gives the slot a very static look.

The gameplay is solid if uninspired, with the features that are included in the game only offering the basic play that most people are familiar with. The re-spin function is a nice addition and it triggered quite often for me, but it did not create a lot of bigger wins either.

Speaking of bigger wins, the game’s volatility is not something to be ignored. Even during the free spins mode, I would regularly walk away with barely enough to cover a single spin. If you are looking to get a big win, expect to play this game for hours.

Browse casinos with Beowulf and other slots from Pragmatic Play. Create an account and try the game for free before making a deposit.

You can play Beowulf in English, Finnish, Swedish, German and 17 other languages. 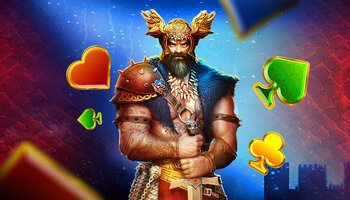