Feeling thirsty for some classic style slots, but with a modern twist? Berryburst is a refreshing blast of colour.

Berryburst is a vivid game full of energy. The theme is set inside a sparkling fruit drink. And no, I’m not joking. It is just that simple, it is fruit in a glass with sparkling water.

It might sound weird, but it is actually pretty genius. The game isn’t a deep, story-driven experience. It is something fun and light-hearted, that you don’t need to take so seriously.

This is why I like Berryburst. It doesn’t try to be anything more than it is. It is a simple, fun game, which has a happy feel to it. It is perfect for every occasion. You can play it just for a few rounds, or sit back and let yourself sink in the relaxing atmosphere.

The game does bear a little resemblance to Starburst, which is not a coincidence. NetEnt made both of these games and they do share some features. You could see Berryburst as a sequel to Starburst; something old, something new, something borrowed and a whole lot of red.

The first word that came to mind when I saw Berryburst, was refreshing. The game looks like a nice drink for a hot summer’s day. As I said before, the theme is actually a sparkling fruit drink.

Berryburst is full of vibrant colours. The energetic atmosphere felt like you could bottle it up and sell it as a sports drink. This game is just plain fun.

Everything here plays around the theme. Every symbol, every button and every sound fit the fruit drink theme. There is a set of symbols in this game that I did not like, but even they were encased in a bubble and float like they were in a liquid.

Berryburst features two sets of symbols, suits and fruits. The fruits are a nudge to the classic era of slots and the big-ticket item when it comes to the wins. The bigger the symbol, the better the win.

The suits are, for me, the only thing out of place here. A heart or a spade is not something you should find in a drink, not even inside a big bubble. Personally, I would have gone with maybe a small berry, or at least something edible.

The only special symbol in the game is the wild. The wilds come in the form of an ice cube, which was adorable for me.

One thing I love about Berryburst is the paytable. This game feels balanced. Sometimes a game will only pay out if you get in the bonus game or get a super high multiplier, but not here. Berryburst scales up well and playing feels good, no matter how big your bankroll is.

Berryburst is a simple game, but not in a bad way. You don’t feel like you are missing out on some special mode or need anything more. It is a straightforward, classic styled slot with a modern take.

I like Berryburst. It is a relaxing game with a positive attitude. You feel refreshed and the theme suits the game perfectly. Even now, I really want to get a fruity drink, because that is all I can think of after playing Berryburst.

Simple and fun; nothing more, nothing less.

Browse casinos with Berryburst and other slots from NetEnt. Create an account and try the game for free before making a deposit.

You can play Berryburst in English, Finnish, Swedish, German and 20 other languages. 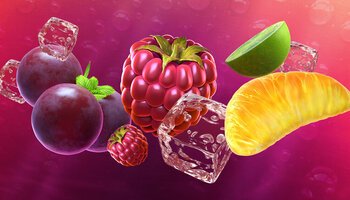