Bicicleta is Yggdrasil’s attempt at bringing the most popular sport in the world to the slot-o-sphere! Surely nice visuals and a plethora of features are enough to bring football to life.

This football slot was released back in 2016, around the time of Euro ‘16. As is to be expected, the game puts us in the middle of a crowded stadium, trying to score goals and win big! We do this by using its 5-reel, 4-row playing field with a respectable 25 paylines.

I’ll start off by admitting that I’m not a huge football fan, but I can respect any slot that uses its inspiration in a fun, interesting way. Bicicleta definitely attempts to do that, but I’ll go over the game in detail to see if they actually succeed!

As always, I’ll start with the graphics since that’s what I notice first. The game looks good which can be expected from any Yggdrasil game. I think the character symbols lack some detail and, perhaps more importantly, character. They might be inspired by real football players but I don’t think they are actually resembling anyone. Considering portrait rights and such, that’s not surprising.

To accompany the look of a big football match it also added sound effects that play as you spin. The crowd cheers on winning paylines and when Free Spins symbols appear on the screen you can hear them get ready to cheer even louder. During the Free Spins mode, it adds a quick tempo, electronic beat that plays continuously.

I thought it was all serviceable but not on the same level as some other slots that Yggdrasil released at the same time. Look at Legend of the White Snake Lady which oozes character and also came out in 2016, and it’s a huge difference in quality. Still, it captures the mood and energy of a real football match well which I think is the most important aspect!

The symbols that are included in Bicicleta all play off the football vibe but I feel like they could have done a little more. There is only one football in the entire game and it’s the Free Spins symbol. The low-paying symbols do have a soccer print on them but are themselves based on the card suits. Just a little disappointing.

The symbols are largely static except the Trophy which spins when it shows up on reel 5 and the different players when they appear in the Free Spins mode. For a game about an active sport I think some more movement might have fit in well but alas!

Although Bicicleta doesn’t have too many features, I think it boasts a healthy selection. The main attraction is the Free Spins mode but there is plenty here to enjoy.

During the base game, you can’t go wrong with the Autoplay feature. I put it on because I like to get to the Free Spins phase. That’s not to say the base game is boring! With the addition of frequent Wilds, it’s quite possible to get a big win, which fits the Medium Volatility. It’s the Free Spins mode where I found the biggest wins, however.

You can get there in 2 ways. Either you get a Trophy and it grants you between 8 to 12 free spins, or you get 3 or more Free Spins symbols at the same time. Once you get into the Free Spins mode, it might look the same at first but looks can be deceiving.

The biggest change is that the player symbols can turn into Sticky Wilds. I say ‘can’ and not ‘will’ because they first have to use their bicycle kick from which the slot takes its name to see if they can score. If they score, they stick around as Wilds. If they can’t, they turn back into themselves.

If that reminds you of something, you’d be correct. The Vikings Go series, also by Yggdrasil, does the same thing. Although instead of bicycle-kicking balls, the Vikings fight against tentacled monsters. To each their own I suppose.

I found this feature to be very appealing but also very rare. There were times where I had 6 or more players on the screen and none of them scored. It’s still a slot after all. If it does work out perfectly, you can expect truly big wins during the Free Spins mode.

Even though I’m not a football fan, Bicicleta managed to grab and hold my attention. The volatility is reasonable with a steady number of wins and the Free Spins mode really paid off numerous times.

I wish they had added a bit more character to the game. The visuals are well done but also rather bland. I understand Yggdrasil couldn’t get the portrait rights for any real players but maybe they could have created their own unique characters? The players that are in the game now look like very generic men that weren’t very memorable to me.

Considering what I know Yggdrasil can and did release at around the same time, the game lags behind a bit. Looking at it as a football slot, it is one of the best ones I’ve played. The graphics look good, the sound is nice and the gameplay is great. With a potential max. win of 47,500 your bet it can be your ticket to the front row.

Even if you’re not a football fan I’m sure this slot can pay off, and you won’t need to know what a bicycle kick is!

Browse casinos with Bicicleta and other slots from Yggdrasil. Create an account and try the game for free before making a deposit.

You can play Bicicleta in English, Finnish, Swedish, German and 18 other languages. 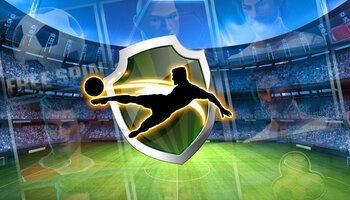