Big Bad Wolf Christmas Special from Quickspin. You know the drill: three pigs with a penchant for home improvement vs a wolf with an appetite for destruction. Oh, and of course, it’s a Christmas special so expect a few fairy lights and a sprinkling of snowflakes.

Once the game has loaded, the first thing that probably meets your eyes is our titular wolf, giving lip service to Christmas in an undersized Christmas robe and ill-fitting hat.

Lurking off-grid, the big bad wolf is strangely dressed in hipster jeans that wouldn't look out of place in the trendier parts of East London. Bad but not particularly big, at least one out of two isn’t bad.

Our piggies also get into the Christmas spirit and are adorned in hats grasping the odd gingerbread man or reluctantly holding a candy cane. Yeah, sure, the big bad wolf is meant to be the meanie but at least he’s making some effort getting into Christmas party mode.

Music is brought to us courtesy of Christmas carol-sounding music, all twinkly bells and feel-good yuletide cheer.

For 5 on any The Big Bad Wolf Christmas Special 25 fixed paylines across 5x3 reels, payouts are as follows:

With any winning combo, the swooping reels feature springs into action. All winning symbols are puffed away by the big guy himself and all windswept symbols duly replaced. Some players might know this better as the cascading reels mechanism.

Wolf symbols appear as scatters. Land 3 or more symbols and trigger the Free Spins round while also being awarded a 3x wager payout and a total of 10 Free spins.

If you’re lucky enough to behold 3 or more wolf scatters landing at the same time, your Free Spins are retriggered with a further 10 Free Spins. More wins activates the Pig Turns Wild feature which can add up to 3 Pig Wilds added to the reels.

Blowing Down the House Feature

5x3 High volatility Big Bad Wolf Christmas Special comes loaded with a generous 97.34% and a maximum win potential of 1,225x. Minimum and maximum bets are set at £0.25 and £100 respectively.

A Wolf in Sheep’s Clothing

There's a huge market for fairy tale slots. Nostalgia is valuable currency for slot developers but unfortunately here's a game that totally lacks any form of rose-tinted sentimentality. Instead, we're left with a slot heaped in naivety and dripping with a Winnie The Pooh aesthetic that doesn't fit with this game in the slightest.

Not a bad mechanic, but also not original, Big Bad Wolf Christmas Special comes across as a cynical slot. This vulgar seasonal grab for those genuinely in the Christmas spirit smacks of cynicism, laziness and disrespect for slot players.

If we wanted to play the same old Big Bad Wolf slot we could just as well adorn our laptops with a touch of tinsel, a few sprigs of holly and some spray-on snow. Without sounding too stereotypically Christmas-hating, there are only two words to sum up this slot: bah humbug.

Browse casinos with Big Bad Wolf Christmas Special and other slots from Quickspin. Create an account and try the game for free before making a deposit.

You can play Big Bad Wolf Christmas Special in English, Finnish, Swedish, Russian and 4 other languages. 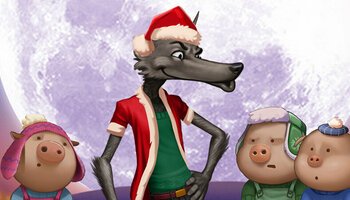