Big Bad Wolf Megaways takes place during the events of the familiar fairy tale where three little piggies hide in their houses while the wolf tries to gain access. The game shows these struggles combined with cascading reels, multipliers and a free spins mode.

The game was developed by the Quickspin studio and released in 2021. It’s immediately obvious that the creative team put a lot of effort into the design of the game. Everything looks great, from the graphics themselves to the animations and the attention to detail. The game revolves around the 6-reel playing field, with the Megaways feature randomizing the number of rows per reel every spin.

As a result, players can have anywhere between 324 and 117,649 paylines on the screen at any given moment. There is also a small 4-reel row at the top of the screen that can be involved with calculating a win. This all happens while we’re looking at the straw house built by the first pig. Every time the symbols drop down we get a peek into the living space as if we’re looking through the wall.

The graphics are great, with everything in the game adding to the fairytale. Players will look at the straw house during the base game. When the free spins mode starts the big bad wolf blows down the house and we move on to the wooden house. If players get the right number of wins, this one is also knocked down and we finally get to see the brick house. All of these have their own visual style, as do the pigs.

Big Bad Wolf Megaways does use some familiar symbols when it fills up the reels. The card letters that we see in so many games make up the low-paying symbols. The design is made to look like wooden boards, so it does somewhat fit into the idea that the playing field is a wall. The higher paying symbols are made to look like various tools as well as the different characters.

The game has High Volatility which means that players won’t be treated to a lot of big wins. Getting a win on its own wasn’t that rare but the payouts are low. Players will depend heavily on getting either high multipliers or big wins with a lot of paylines at the same time. The RTP is 96% which is exactly on par.

When playing the game, you can pick a bet between £0.20 and £100 per spin. This gives people enough room to decide how they want to play it. While a lower bet might not net any big prizes it will allow someone to play for longer. With high volatility, that’s always the goal. There is also a maximum win of 30,540x your bet which is huge. It’s definitely a lot more than average for a game with similar volatility.

The game’s symbols include:

Big Bad Wolf Megaways has relatively few features when compared to some other Megaways slots. That said, there are still a number of them that augment the gameplay in different ways. I didn’t feel like it was overwhelming at all, which made it easier to get into the slot.

The features you’ll find here are:

As usual, most of the time players will be playing in the base game. The free spins mode wasn’t particularly hard to activate but that doesn’t mean I saw it particularly often. The game brings players a good deal of variety during the standard gameplay, so I never felt like I was missing out. The Megaways feature is definitely something that helps in this regard.

There are a number of things to pay attention to while playing the game. The Megaways feature works well together with the bonus row at the top of the screen. These basically guarantee that the middle reels are at least 3 rows high as the minimum length across the board is 2 rows. When there’s a win, those symbols drop away to make room for new ones. Unlike most games with such a feature, getting consecutive wins doesn’t necessarily unlock anything.

The free spins mode is the most interesting part of the game. Not only do we see a change of scenery as the straw house is blown down and we move to the next house. There is also a multiplier that is applied to all winnings as long as bonus symbols are collected.

Big Bad Wolf Megaways brings the old fairytale to life in a very entertaining way. The game looks great with some amazing graphics. A lot of animations help bring the story further to life. With such a familiar story it’s fun to see how the studio incorporated the different elements into the overall gameplay.

When it comes to the gameplay, players will likely not be surprised that much. All of the elements that are incorporated into the game are very popular nowadays. The feature also works as you would expect. I always appreciate a counter on the screen that shows the current number of paylines that the screen has, which is included in this slot.

The biggest downside for me was probably the low payouts for normal wins. Players are practically forced to get a high multiplier during the free spins mode if they want to see any return on their spins. During the base game, payouts are extremely low even when they do happen quite often.

Browse casinos with Big Bad Wolf Megaways™ and other slots from Quickspin. Create an account and try the game for free before making a deposit.

You can play Big Bad Wolf Megaways™ in English, Finnish, Swedish, German and 24 other languages. 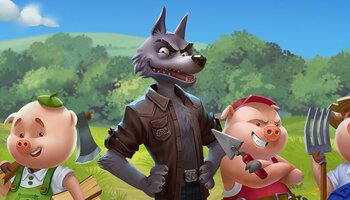