Big Bass Bonanza Megaways is the altered version of the original Big Bass Bonanza, this time with a special popular feature. Again, we are spending our time fishing as the game entertains us with free spins, wilds and multipliers.

Just like its predecessor this game was developed and released by Pragmatic Play. This iteration came onto the scene in 2021, offering players the opportunity to enjoy this slot with perhaps the most popular feature currently available. The game takes place on a 6-reel playing field but now has a random number of rows per reel every spin between 2 and 6. As a result, players can have anywhere between 324 to 46,656 paylines on the screen at a time.

The appearance of the slot is largely unchanged and those familiar with the original slot will immediately recognize it. The colours are bright and almost neon, making it a bit too garish for my taste. However, it does help keep the different symbols apart. There are no real animations to speak of except some swimming fishes in the background. The symbols look somewhat basic but they do their job well enough.

When it comes to the music all I can say is that it’s fine. It has an upbeat song playing that feels appropriate to the setting. Larger wins get a special jingle and when you’re about to activate the free spins mode a celebratory tune starts playing. Other than that, the sound effects are what you’d expect from a regular slot. It does what it’s supposed to do without going overboard.

Big Bass Bonanza Megaways uses the same symbols as the original slot, which means the usual division of low- and high-paying symbols. While card letters are used to represent the symbols with the lowest value, different fishes and fishing implements represent the high-paying symbols. All of these have small animations when part of a win which makes it a bit more interesting visually.

Players should prepare for a slot with High Volatility. If you were expecting the Megaways feature to improve the number of wins you would get to see I have to temper your expectations. I found it increasingly difficult to get wins, and there would be times I would spin dozens of times without seeing a single one. This can obviously be different for other players, but be aware of it all the same.

If you want to play this game you have the opportunity to change your bet according to your preference. Players can pick a bet between £0.20 and £100 per spin. This is the common spread for slots like this. There is a maximum win of 4,000x your bet which is a bit below average for games with high volatility.

The game has the following symbols, roughly based on their importance:

Big Bass Bonanza Megaways obviously has a very distinct feature to separate itself from the original. The Megaways feature means that every reel has a variable number of rows every spin. This means the number of paylines also changes. While reels 1 and 6 can be between 2 and 6 rows high, reels 2 through 5 can only be between 2 and 5 rows high. However, those reels have another row above them, meaning they always have an extra tile to use.

The game does come with additional features, including:

What was the main focus of the original game comes back in this game. Fishes each have a coin value associated with them, shown on the screen. This value can change every time. These coins are not awarded unless there is a Fisherman symbol on the screen. He only shows up during the free spins mode. For every 4 Fishermen that appear during the free spins mode, a multiplier is applied to the subsequent wins.

I thought this was an interesting feature but it does not work well. I never got 4 to show up during any of my free spins and that meant I never got to enjoy the multiplier.

If you were a fan of the original slot you will most likely enjoy this version as well. People who are drawn to the Megaways feature might want to keep looking. I felt like there are other slots that use this feature in a more engaging manner. The limited number of rows means the impact on the gameplay is reduced, making it feel almost redundant.

A few players might get something out of the free spins mode and the added multipliers but I found that to be rather disappointing. Obviously, everyone’s mileage will vary. The coin wins do pay out frequently in the free spins mode, making it almost always a beneficial part of the game.

Browse casinos with Big Bass Bonanza Megaways™ and other slots from Pragmatic Play. Create an account and try the game for free before making a deposit.

You can play Big Bass Bonanza Megaways™ in English, Finnish, Swedish, German and 17 other languages. 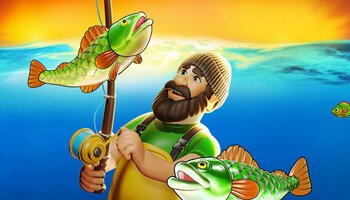