Big Fin Bay is a slot that brings the players to the lake side where they can throw out a line and see if they can catch any of the colourful fish. Perhaps they’ll also be able to use the expanding reels, megaways and free spins to catch an extra prize.

The slot was developed by Thunderkick and released in 2021, meaning it’s one of their latest games at the moment. Its presentation is excellent, with sharp and colourful graphics that bring us to the shore of a lake. In the distance we can see several pitoresk houses and a lighthouse while the occasional boat sails past and seagulls fly from side to side. It’s all done very simply but we get a good idea of the location and setting.

We play the game on a 6-reel playing field, using the megaways feature. This means that every reel has a random length every spin, varying between 2 and 7 rows. As a result, players can get anywhere from 5,040 to 117,649 paylines to get a win on. These wins are achieved through the use of standard symbols, divided between high- and low-paying ones. The high-paying ones are different types of fish while the low-paying symbols are simple card letters.

If we switch on the music we’re treated with an upbeat energetic song that has some jazz undertones as well as more tropical influences. I thought it sounded alright but the volume is rather low and the sound-effects that play during a win will be much louder. The free spins mode does play the song at a louder volume though.

Big Fin Bay has a relatively big number of symbols which are easily distinguishable thanks to the different shapes and colours used to portray them. Meanwhile, the slot will give players the ability to see a win by having the winning symbols light up. It will also show the total win count on the screen. During the free spins mode, the background shows how evening is falling and everything is covered in orange, making it obvious to the player that they are using free spins.

When it comes to the difficulty, this slot has High Volatility thanks to the low payouts and the large number of different symbols. Wins aren’t necessarily very difficult to get naturally during the base game, but they won’t pay out a lot. In my experience, my funds tended to stay pretty stable but I would need the free spins mode to activate in order for me to get a bigger win.

To deal with the volatility, players can pick a bet between £0.10 and £100 per spin. Picking a lower bet will mean smaller wins but a player will also last longer with their funds. If you feel like you’re comfortable with the volatility or you are a power player, you can always increase your bets to win bigger amounts. The max. win of 15,040x your bet is also quite an incentive to keep playing.

When it comes to the symbols in the game, you’ll encounter the following:

Big Fin Bay will not require a lot of explanation when it comes to the features, even if players aren’t familiar with any of the ones included in this slot. That’s simply because there aren’t that many features present anyway. The features include:

Another detail is that the wilds during the free spins mode will lengthen the row they’re on by 1 and it will stay longer for the rest of the mode. Obviously, the more rows each reel has the more paylines are active. This in turn increases the opportunity of the game to generate a win. Once a reel has reached the maximum height of 7, it will award an additional 3 free spins.

The volatility definitely comes to the forefront during this mode, and players are more likely to see big wins when they trigger it. In my experience, getting into the free spins mode isn’t exactly easy but it happened quite frequently all the same.

Big Fin Bay is a slot that brings a lot of details and creativity with it. I really liked the sense of art direction and style but I feel like they could have done more with it. There are some subtle animations in the background but the symbols are mostly static. The free spins mode also doesn’t really offer enough new things to see to feel like an important part of the game.

The gameplay is solid if pretty basic. If you’re okay with the megaways feature then this slot will be an easy fit. You can just start spinning right away without any extra explanation needed. The volatility does show itself regularly, especially since the base game offers such low payouts.

If you’re interested in the jackpot or you’re simply looking for an engaging but simple game, you can’t really go wrong with this one. I would say that only players who stick to the classic fruit machines won’t be having such a great time.

Browse casinos with Big Fin Bay and other slots from Thunderkick. Create an account and try the game for free before making a deposit. 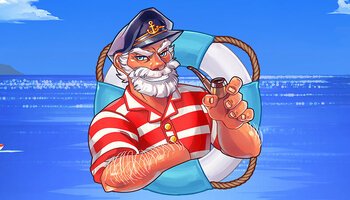