Bigbot Crew has us travel to the future to join a small crew of clever teens who built their own robots, each enabling a different feature to help us out while the game plays.

The game was developed by Quickspin in 2018, released with a set of highly-detailed graphics, a collection of great features as well as a pumping soundtrack. The slot has a 5-reel, 4-row playing field and a total of 40 betlines on which players can try and win.

The background shows a futuristic but rather decrepit looking cityscape where our protagonists live, reminding me of movies like Akira and Ghost in the Shell. This is enforced by the different signs with Japanese text on them. The reels themselves are populated by original symbols, including the different characters, robots and paraphernalia.

The music is a sort of low energy beat track with a nice bass and chill vibe. The wins are punctuated by a short riff in an electronic style that I felt fit the theme well. Getting into the free spins kicks the music up a notch with electric guitars. I think the sound-design did a good job setting the tone of something that takes place in the seedier parts of a futuristic town.

The game has a selection of hand-drawn original symbols to fill the reels. The characters and robots look especially good, resembling a type of semi-realistic cartoons. Each of the symbols is easily distinguishable because of the use of colours and shapes, letting your eyes easily identify them. Whenever there’s a win, the game will highlight the tiles involved and show the total coin win.

As you can tell, the payouts for even the highest-paying symbols on a five-of-a-kind betline is still very low. There are a few reasons for this but it comes down to the fact that the game uses Stacked Wilds a lot. These often facilitate wins which means players don’t need to have the same symbol on screen as much, and the Stacked Wilds make multiple payouts on a single spin more likely.

There is also the fact that a Stacked Wild triggers a re-spin with the Wild reappearing on a different reel, again making wins very likely. To balance this out, getting wins without these Stacked Wilds is hard and pays very little. It’s why the game has a listed High Volatility.

Bigbot Crew has a number of different features. None of them is especially unique or rare but as always it’s the combination that counts. In this slot, I found the features to be very strong in small bursts, explaining the high volatility. The Stacked Wilds and the Free Spins mode are to thank for creating some sizable wins. At the same time, I’ve had plenty of moments where the Free Spins mode only paid out half a dozen wins or the Stacked Wilds didn’t get any wins.

Bigbot Crew has a special Bot that fills an entire reel and acts as a Wild. I found this Stacked Wild to often, but not always, stop to exactly fill the reel. It’s also possible for this Wild to nudge itself up and down to make it fill the reel although it doesn’t always do that. When it does, it automatically grants the player a re-spin, regardless of a win.

With 3 Bonus Symbols, the Free Spins mode is activated. While playing the Free Spins mode, players can receive additional free spins when a Stacked Wild appears. These can appear on all reels during this mode, and also randomly reappear during each free spin.

Both these features resulted in some big wins during my time playing, especially the Free Spins mode. At the same time, their volatile nature is showing by occasionally not giving much in return at all. It often becomes a case of continuing to play and assuming it’ll even out over the long run. Players can choose a bet between £0.20 and £100 per spin to balance their risk/reward to their own preferences.

I thought the features in Bigbot Crew were very good. They appeared frequently and could have a tremendous impact on the outcome of a single spin. The re-spins added extra value to the Stacked Wilds too. If you keep the high volatility in mind, you won’t be disappointed.

Bigbot Crew is a beautiful game with a lot of original art and a collection of interesting features. The animations that are put into the slot make the game come alive while the original symbols make sure the player stays immersed in the setting.

Players that enjoy a classic slot experience might not find exactly what they’re looking for here as the game has a slightly larger playing field and a few features that aren’t really standard. I do think they can enjoy this game though if they don’t mind those unique details. Meanwhile, modern players will mostly have a great time playing this game.

If you decide to give this slot a try, players have a shot at the max. win of 5,203x your bet which is a big boon. I didn’t really feel like I was ever close to this but even regular wins could be quite a few times the original bet.

Browse casinos with BigBot Crew and other slots from Quickspin. Create an account and try the game for free before making a deposit.

You can play BigBot Crew in English, Finnish, Swedish, German and 23 other languages. 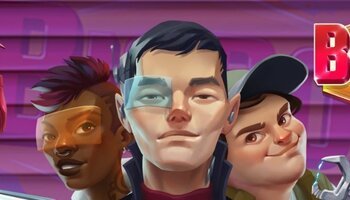