Birds On A Wire slot review

Play Birds On A Wire

Birds on a Wire takes a good look at life for the birds as they sit on the electricity cables and spend their time not getting electrocuted and dodging cats. Players can now enjoy this as well, with multipliers and cascading reels as extra entertainment.

Developed by Thunderkick in 2015 the studio was clearly trying to differentiate itself from other publishers as this slot does some very creative things with its appearance. The gameplay largely sticks close to that of regular slots but the way they chose to present it definitely makes it easier to remember. The game is built around a standard 5-reel, 3-row playing field with 17 paylines.

The game is based around a group of birds that fly onto the wires that represent the rows and fly off again for the next spin. Each of the birds is easily distinguishable thanks to their colour and shape. The scatter symbol is a cat hiding a cardboard box that jumps out when the free spins mode is activated. It’s that sort of details that make it very entertaining to watch.

Whenever there’s a win, the birds involved will get electrocuted and drop away, making room for the symbols above it to drop down and have new symbols drop in. This repeats as long as new wins are created. On the left side of the screen, we can also see a multiplier tracker that increases with every sequential win.

Birds on a Wire features a moderate number of symbols that are all based around birds. There aren’t any other symbols, except for the sneaky cat, which helps create a solid foundation. It’s easy to see that the designers intended this entire game to revolve around literal birds on a wire. As a result, this game has a very distinct personality that really resonated with me.

That said, the game has High Volatility since the game only has a small number of symbols and a limited number of paylines. To compensate for this, the payouts for any win are very low and the game heavily depends on its cascading reels and multipliers mechanics to increase the wins to an acceptable level.

If you are not comfortable with this level of risk, or on the other hand you want to enhance it, the game offers the possibility of increasing your bets between £0.10 and £100 per spin. The game also features a max. win of 1,600x your bet but considering the volatility, this can be seen as mediocre at best, and below-average at worst.

The symbols in the game are, in order of importance:

Birds on a Wire has a few different features that will keep players relatively engaged during their time playing. I thought the division of features between the base game and the free spins mode was excellent, keeping them pretty much the same regardless, just increasing their usefulness during the special mode.

For starters, a quick look at the features:

These features likely won’t surprise anyone who has been playing slots for a while. The cascading reels did catch me off-guard a little bit when I first saw them as the game looks like a standard slot in every other way. They also don’t activate often since wins aren’t that easy to get, but the multiplier on the side of the screen should have been a hint.

Players are expected to get a series of wins in order to create bigger coin wins through the multiplier. The payouts for regular wins are too small to really compensate for your losses as you play. That said, even though it has high volatility I found it to create wins quite regularly. I ended up with positive funds as I kept playing.

Birds on a Wire is a very unique slot when it comes to its appearance and ideas. The theme is perfectly encapsulated into the game and offers players a fun playing field to look at. The idea of adding cats as scatters and the electrocution mechanic as a feature are both excellent ways of extending the idea.

The features are a lot less experimental and I think most players with some slot experience will have no problem sliding into this game and starting their play. I found the different features to be explained well on the screen itself but if you have to check out the paytable, it’s all laid out there in clear terms as well.

The downside of the game is mostly that it features a lacklustre jackpot. During my time playing, I did end up in the positives as far as my funds go but it was never a definitive win that made me want to stop playing. Power players might want to look elsewhere for a slot to try but if you’re a casual player that enjoys something original and fun, I think this will be a great choice.

Play Birds On A Wire for free

Browse casinos with Birds On A Wire and other slots from Thunderkick. Create an account and try the game for free before making a deposit.

You can play Birds On A Wire in English, Finnish, Swedish, Norwegian

Birds On A Wire supports GBP, EUR, SEK, NOK and 2 other currencies. 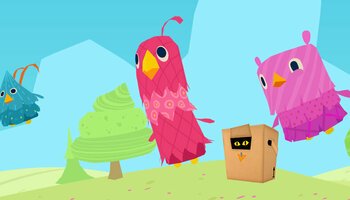