So whether you are into Italian hard rock or rock in general, it's worth checking out the Black Mamba slot machine. Featuring Cascading Reels, Progressive Multipliers, a Concert mode and Solo bonus features, the Black Mamba online slot brings to the reels a rock concert packed with excitement.

But did the Black Mamba online slot make us rock? Let's find out.

I can't tell what made Play'n Go pick for its slot theme an obscure band. But uploading the game for the first time revealed a slot that is committed to the rock genre. The welcome screen shows the Black Mamba band members in the background of what appears to be a brick-walled rock club/cellar.

The same walls then serve as the game's backdrop, with the 5x5 grid in the screen's centre. To the left of the grid are loudspeakers that turn into a bonus meter and multiplier counter. To the right of the greed stands Cecilia, one of the band members, on a small stage. Although different band members take to the stage during solo bonus rounds, it is mainly occupied by Cecilia.

Whether or not you are a rock fan, the background music is pretty good. As soon as you upload the game, it greets you with guitars and tunes that leave no doubt as to the rock concert you are about to enjoy on the reels.

When the Solo bonus features are triggered, the music becomes more intense. But all being part of the slot's theme, it works well. And remember that if you get tired of the music and it's too loud for you, you can always turn it off and keep spinning.

Black Mamba is not a traditional slot with horizontal paylines. Instead, it awards wins when symbols form clusters. With at least 3 symbols aligned vertically or horizontally, it's something in-between standard clusters mechanics and cascading reels. When you land a winning combination, the winning symbols are removed off the reels, making room for new symbols and more chances to win.

As expected from a slot dedicated to a hard-rock band, the high paying symbols at the Black Mamba slot machine are depicted by no other than the band members themselves. Continuing the rock theme, Black Mamba's low paying symbols are represented by different elements from the music world.

Determined to rock you, the Black Mamba online slot boasts not one, but two Wild symbols:

The Black Mamba online slot doesn't feature a Scatter Symbol per se. Instead, you will need to clear the full grid to trigger Free Spins.

So are you ready for a hot and heavy rock concert? Along with the energizing music, the Black Mamba slot machine will also pump up your adrenaline with cool bonus features.

The top speaker to the left of the grid is a multiplier counter. The multiplier is increased by 1x with every win and can rise up to 11x. If you charge the bonus meter all the way with Concert bonus rounds and Free Spins, you can get a multiplier of up to 50x your stake!

Once activated, each band member can then go on stage for a solo performance:

The Solo bonus feature can be triggered randomly at any losing spin.

The bonus meter is set left to the reels. If you manage to charge it with 4, 5, or 6 bars, you will activate the Concert feature. During the concert, each band member will perform their solo, and you will enjoy each's respective bonus features.

If you manage to clear the entire grid of cascading reels from symbols, Free Spins are triggered. During Free Spins, one Martina solo will feature on each spin. Also, a solo by another band member will feature during losing spins.

You can play the Black Mamba slot machine with a stake of between £0.20 and £100. The maximum win is 5,000x your stake. This means that you could win up to £500,000 in a single spin, not bad at all for a rock concert ticket, considering it is a high-volatility slot. The RTP (Return to Player) of the Black Mamba slot is a respectable 96.5%.

More Slots to Rock Your World

If you are into the rock genre, you must also try Annihilator. It is Another Play'n Go slot machine released in May 2020. Similar to Black Mamba, you will enjoy here high volatility and a 5,000x max win. It also features a 96.2% RTP, Sticky Wilds, Stacked Wilds, and exciting bonus games.

Black Mamba is a high volatility slot machine with a lot of noise and action all around. So keeping up with all the rock-on-the-reels can be a bit challenging if you aren't a band roadie. The design is good but very busy and cluttered at times. So if you are into action-packed gameplay with a lot of guitar riffs in the background, you'll definitely enjoy spinning the reels of Black Mamba.

If you prefer a more subtle experience on the reels, this slot may not be for you. Still, with inspiring solos, great concerts, and chances to win 5,000x your stake, you can come and visit for a few spins. If it gets too loud for you, just turn off the sound.

Browse casinos with Black Mamba and other slots from Play'n GO. Create an account and try the game for free before making a deposit.

You can play Black Mamba in English, Finnish, Swedish, German and 30 other languages. 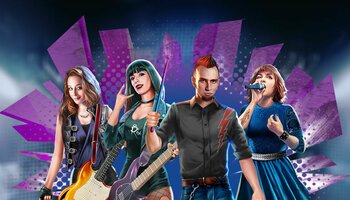