What do you do when you encounter a golden sarcophagus, knowing there is a mummy inside? I'd personally call my friends to haul the thing out from the crypt and straight to the local sorceress to have all the spells and hexes undone. It may sound like the stuff coming out of a bad movie, but it is actually a way to sum up the Black Mummy slot by Tom Horn Gaming.

I saw the game in the company's catalogue and thought I might try it. The set of specs seemed enticing enough: five paylines, medium variance and an average theoretical return to player of 96.00%, however, the lack of extra features causes the game to behave like a very basic fruit-themed slot. Could I bring myself to stomach the smell of mummifying balsams and carry on with the game? And why would anyone come near Black Mummy?

Lo and behold, Tom Horn has hidden a little gem amidst the bandages which made me realize that the game has the ability to throw in a surprise and this doesn’t happen only once every 100 spins. In fact, the game’s defining feature comes with the mummy symbol and its potential of casting a benign hex on the royals. This is what made me curious as to how this can transpire and I have to admit, I was positively surprised.

I think it’s plain to see that the graphic design wasn't primed to woo anyone, but there are few positive things about it. First off, the symbols weren't drawn with a lack of taste or craft, it's just that nothing on the reel set moves when there is a winning outcome. Otherwise, the golden pharaoh's mask, the bracelet, the winged scarab and all other symbols are quite decent in their appearance.

The only symbol that can pull out any moves on the reel set is that of the mummy. Land a win with it and you'll see the thing roaring its skull at you in celebration. I can't say this has been a galant touch on the part of the designers, but since the mummy is the most important symbol of the game, I looked forward to seeing it do just that as often as possible.

The remaining four of the eight standard-paying symbols are a bracelet, a scarab, Horus' eye and a pharaoh's golden mask.

Unlike most online slots made in 2019 or 2020, every single one of these symbols pays more than your bet, which makes Black Mummy straightforward - in other words, you know that you are getting decent amounts for every win consisting of these symbols.

Here is the schedule of payouts to state the above loud and clear:

The thing that I love the most about simple, five payline games such as this one is precisely this - decent payouts with high-paying symbols that are not shy about showing their face in the game in the right number.

I had gotten a winning outcome for each one of these symbols as they’ve come in threes and fours on a payline. Naturally, the two highest-paying symbols don’t land in fives so easily.

The thing that can chase you away from any given game is usually the graphics or the lack of features, but that doesn't mean a particular game can't trigger decent payouts.

Black Mummy is one example of a game that can take you by surprise, so forget the lack of animation and visual niceties because we are looking at a particularly gifted mummy in this picture.

Considering the concrete fact that most winning outcomes are paid for low-paying symbols, this game does it right by including the possibility of adding a win multiplier for every outcome that mixes royals and wilds.

Needless to say it, the game is quite paced, verging on slow, so if you are looking for a leisurely reel adventure that has a classical slot machine look and feel to it, then Black Mummy may be the game for you.

Browse casinos with Black Mummy and other slots from Tom Horn Gaming. Create an account and try the game for free before making a deposit.

You can play Black Mummy in English, Finnish, Swedish, German and 22 other languages. 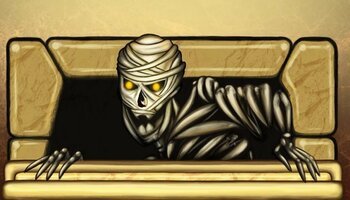