Amon Ra was such a major god in Egypt that there were around a dozen spin-offs of his name and just as many different cults. He was known as Ra-Horakhty, Horus, Mnevis, Atum and so on, but we'll just call him Ra because you can chummy with this god on the reels of this Push Gaming Slot called Blaze of Ra.

Blaze of Ra is a fitting title for the game. The human-like, falcon-headed deity presides over a raging sandstorm but the real action is taking place on a reel set of five reels, four rows and 40 paylines.

I had gotten acquainted with a number of games by this company and I have to say that the game at hand strikes me as too familiar, but I won't reveal any spoilers for now. Blaze of Ra is decent enough to provide an OK gameplay thanks to two extra features.

On the other hand, this is one of the games that doesn't quite mirror the excitement and features found in other games by the same company. Why? I get the feeling that Blaze of Ra needed a bit more attention to detail in order to grasp the full potential of the theme. The math model feels alright but the base game is not keen on triggering too many medium-sized wins.

Maybe this was the reason that nudged Push Gaming to replicate the Nudging Wilds feature in another game that is coming up shortly.

I like the name of the game. Blaze of Ra has a dramatic ring to it, almost apocalyptic, but it hasn't been translated well onto the reel set. the background is a sandstorm that keeps scattering the sand dunes from around the pyramids. That bit is lively and animated, but it's just overbearing and steals the show from the reel set.

The bonus feature, on the other hand, takes place under a blue, stellar sky and next to a colossal sphinx. In both instances, the falcon-headed god is there to summon the spirits onto the reels where he is in the role of a wild symbol. That part is pretty cool and the symbols are well-drawn but are also in a dearth of animation. They just feel, well, dry amidst all that sand.

I'd give Blaze of Ra four Bojoko badges for the musical theme and for the way in which the bonus feature looks and feels, but the rest of the gameplay has a lot of potential left untapped.

Nor surprising, Ra is the top-paying symbol, but you aren't going to see it land in five positions in return for the 50x your bet payout. I gave the game more chances than I really intended to see if the three expanded wilds or the Nudging Wilds create fertile ground for additional wilds to post. It doesn't happen. I saw three wild symbols at most, but I really hope that you get a better go than me.

I found another good reason to play a different slot by Push Gaming instead of Blaze of Ra. The payout structure is decent but there are better payouts in another game that has the same set of features and specs.

There are six symbols which is too many considering the four royal cards, however, only the second from the top pays back the full bet. That's the Anubis symbol. Bastet the cat-god pays 1.5x your bet for three of a kind.

The ankh symbol, the flail and the cane, Horus' eye and the lotus flower can pay between 0.25x and 0.75x your bet. I wish it were otherwise. Four matching symbols pay between 1x and 7.5x across the board of high-paying symbols. Decent, but it only happens when the nudging wilds come into play, otherwise it is a rare winning combination.

Blaze of Ra enjoyed popularity until it was dethroned by another Push Gaming release - Tiki Tumble, which took both of the features and gave them a slight edge in that the nudging wilds can appear in the free spins bonus. Tiki Tumble felt more like it.

The math model was also medium to high, but there is something about the whole experience that makes Blaze of Ra less preferable. Another thing is the payout potential. Blaze of Ra has 2000x your bet as its max potential pay while Tiki Tumble can pay up to 3358x.

Overall, those who haven't played either of the two may as well check out both. Your experience may end up on a winning note.

Play Blaze of Ra for free

Browse casinos with Blaze of Ra and other slots from Push Gaming. Create an account and try the game for free before making a deposit.

You can play Blaze of Ra in English, Finnish, Swedish, German and 16 other languages. 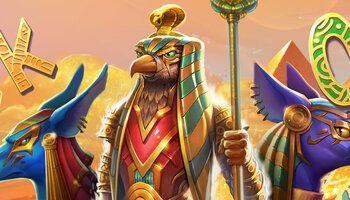