Blood Eternal asks players if they’re brave enough to venture deep into an ancient mansion that is inhabited by vampires. To entice us, the game offers free spins, wilds and an impressive max. win.

Betsoft released this slot in 2017 with some impressive graphics, showing a dark gloomy hallway in a mansion in the background. The symbols on the 6-reel, 3-row playing field are nice looking and very detailed, even though the low-paying symbols are based on the classic card letters. The designers still made them look quite gothic, helping it fit the game a lot better.

There are some animations in the game that help the game come alive, including when there is a win on one of the 30 paylines. The special vampire feature activates when a vampire symbol and a victim symbol are touching, showing us how the victim gets bit and turning into a Sticky Wild.

I wouldn’t really consider the sound that plays during Blood Eternal a soundtrack, as it only triggers when it’s possible the Free Spins mode activates. Meanwhile, the reels make a loud ticking noise when they’re spinning. There isn’t much to enhance the atmosphere, with even the music sounding bombastic and loud, not fitting the dour horror setting.

The game is set in a horrific setting with vampires, which obviously means that mystical and gothic items fill the reels. The symbols are not all original but they are all designed to fit the game, which I thought was a nice effort. The low-paying symbols still ended up looking quite similar which sometimes made it harder to see any wins. Fortunately, the game highlights these and makes sure the player doesn’t miss them.

The symbols you’re playing with are:

As you can tell, the payouts for the symbols is rather low. The game still has a Medium Volatility since players are supposed to get multiple payouts on a single win. There are 30 paylines but the game counts them both ways, which makes it more likely to get wins.

I don’t think it really fit my experience playing this game, as there would be quite some time between wins as well as the Free Spins mode not triggering enough to be a big influence. This is bad since there are extra features at play during this mode.

Blood Eternal does not have a lot of special features that augment the gameplay, but it does have some.

The Wilds don’t appear very often and didn’t felt like they contributed many wins. At the same time, the Sticky Wilds and Random Wilds that appear during the Free Spins mode are a lot more dependable. As a result, the Free Spins mode was often a big part of my total winnings.

It does create a situation where the base game feels like a part of the slot that is put in between free spins modes. The base game offers almost no extras to make the game much easier, except for the Bat symbols that exist in two variations.

A Bat can either be a single or a double symbol, counting as that number on the payline. This can extend the win up to twelve symbols which aren’t possible with any of the other symbols. I’m not quite sure what originated this feature as it’s not something a lot of Betsoft slots make use of. It also doesn’t play a big part in this game as they hardly ever show up at all.

In general, the features in the game are fine but they are too spaced out to feel like a part of the slot. The Bat symbols were almost completely absent. Another problem is how rarely the Free Spins mode activates. They are definitely the best moment to get some big wins, but with it being so rare that’s almost impossible to do.

During my time playing, I found that Free Spins were often a good source of wins but never quite enough to make back what I spent to activate the mode. As a result, my funds were always declining and I never felt like I was going to get any big wins.

Blood Eternal is one of the nicer looking slots by Betsoft, with the symbols being big and bold. The background does a lot to establish the atmosphere. I did think the music dropped the ball somewhat as it would lend itself perfectly for a gothic theme but instead we got bombastic fanfare.

The features are not terrible but too spaced out and infrequent to be a real element in the gameplay. Especially the free spins mode is not a big enough part of the game to feel useful, even though it has the most features in it that can facilitate big wins.

Players can choose a bet between £0.30 and £150 per spin. I would recommend players to use some care when they first start to play as the medium volatility doesn’t really give the right idea. The game has a max. win of 6,437x your bet which is nice but didn’t feel attainable.

Browse casinos with Blood Eternal and other slots from Betsoft. Create an account and try the game for free before making a deposit.

You can play Blood Eternal in English, Finnish, Swedish, German and 22 other languages. 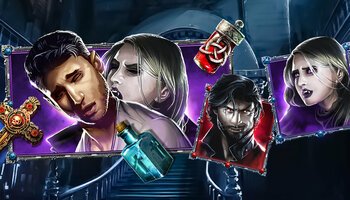