You can be in the company of comely vampires and stay beyond the crack of dawn on the Blood Lust slot. The game comes with three rows, five reels and 99 paylines that can capture more winning combinations that I could have imagined. Exploring this world requires only 20p per spin to play and may result in a sudden alignment of fully-stacked reels translating into big wins. I like what ELK Studios has done with this title. The game is furnished with a very interesting gameplay model and a high volatility engine.

Since Blood Lust is a high-paying game that can top 2,500x your bet from a single spin, the gameplay includes few extra features that can trigger both during the base game and the free spins bonus.

ELK Studios has tapped the inexhaustible potential of the chic-vampire theme. Somehow, it is impossible to separate this from the love intrigue that's always part of the plot of movies about vampire romance.

I am not a big fan of this genre of film or literature, but I can relate to Blood Lust simply because ELK Studios has nailed the graphic design and the features.

The symbols aren't too impressive, but the overall dynamic of the reel set definitely is. Close-calls and winning outcomes are made known in a flamboyant visual effect. There is a lot of liquid-electric-fire type of movement surrounding the reels, symbol stacks and individual symbols.

All of this makes Blood Lust fun to play. There is an audio track that loops on and on, but the melody and the mood have been matched so well that you don't even notice it.

Each vampire symbol that lands on the reels automatically fills a gauge on its respective meter. When the meter gets filled, that symbol is replaced by the game's highest-paying Dracula symbol. This element of the gameplay is pretty beneficial when it combines with respins and boosted stacks

The respin symbol can land on reel five only. When it does, it triggers a respin that comes with a high probability of posting high-paying symbol stacks.

I like this feature because it can turn up a random number of boosted reels. In other words, you can get one vampire symbol kind to replicate on one, two or more reels. With a Wild in the right place - that's first or second reel as a most preferred outcome, this feature can make some pretty decent winnings.

The bonus symbol is a scatter and can land on any of the five reels. You need three to trigger eight spins. This number can grow bigger if you land extra bonus symbols on the reels.

Each bonus symbol during the free spins comes with +1 spin. These can add extra notches to your tally, however, it gets better when you have a +1 symbol adjacent to +1 Bonus symbols. In this case, the number of free spins is greater than one.

If you are new to online slots and see that you can only win 5p from a one-pound bet for three matching card suits' symbols, you'd think there is something wrong with the game.

So how can a game that starts out really low have a maximum payout potential of £250,000?

Upon closer look, the payout structure on Blood Lust is well-balanced thanks to the 99 paylines and an ingenious probability machine.

All of the low values can add up when you land blocks or matching symbols or general winning outcomes that draw across more than one winning payline.

It doesn't take making too many spins to realize that the features kick in quite regularly. Getting three of a kind across two paylines and a wild or a booster may bring that spin closer to winning back your full wager or getting more.

The bets on Blood Lust are between 0.20p and £100.00 - not a huge range, but it covers well the low, medium and high stakes aspect of playing a slot game.

And, at last, the paytable structure, which again, we ought to take with a pinch of salt:

On another note, for those who don’t know, games by ELK Studios come with their unique bet-sequencing apparatus which is accessible from the menu. You can choose one of the modes to enable the game to change the size of the bet according to a specific pattern. In my experience, this feature hasn’t contributed to the gameplay, but it may be a matter of personal preference. Conclusion

Those of you who are into the vampire romance theme will find Blood Lust likeable. I can’t emphasize that the gameplay is quite entertaining - the graphics, the sound design, the overall mood - all of it. The other plate on the balance scale is for the features and gameplay, both of which are well-placed within the context.

And lastly, the volatility. Blood Lust plays across a highly-volatile engine manifesting through a hit frequency of 23.5% - not impressive, but it is obvious that the potentially huge payouts (up to 2,500x your bet) are like “freak accidents” - they may occur on any spin.

Browse casinos with Blood Lust and other slots from Elk. Create an account and try the game for free before making a deposit.

You can play Blood Lust in English, Finnish, Swedish, German and 18 other languages. 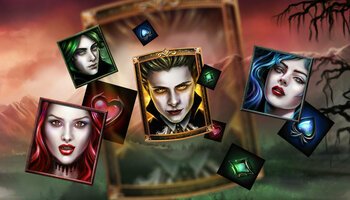