Are you brave enough to step inside the dark castle of vampires? Blood Suckers II is for fearless adventurers only!

As you might guess, Blood Suckers II is the sequel to NetEnt’s 2009 slot Blood Suckers. Released in 2017 the sequel takes us deeper and straight into the old lair of these night-loving creatures.

You start your journey by meeting a beautiful young woman, dressed in red. Amilia, who stands before her ancestor’s castle is well prepared, as she shows you her crossbow. But that’s not the only thing protecting her, in fact, she’s a vampire herself!

Your task is to help her find the treasures hidden in the castle. You see, before the vampire hunters killed all of her ancestors, they quickly stashed their gold and jewellery away from humans. Now it’s her duty to collect the valuables and hopefully restore her family’s wealth.

First I need to address, that I am a huge fan of horror stories! So Blood Suckers II, among other horror-themed slots, are admittedly my weak spot.

The graphics of the slot are nicely styled and have a perfect level of creepiness. Amilia herself looks great while she stands proudly next to the reels. On occasion, she admires her crossbow and might signal you to hurry up - after all, there’s a massive castle with several rooms to explore!

But I still think the background music is the best part of the experience. It’s subtle, scary and ominous, so the delivery is just right. At times you might even hear a floorboard creak in the distance… Did it come from behind you? Is something following you in the darkness?

Blood Suckers II has a total of ten paying symbols, plus a Bonus symbol. The paying symbols are Wilds, Scatters, vampire characters, and suits.

With five Wilds on the same payline you will score a whopping 10,000 coins. Five Scatters pay 2,500 coins, after which the winnings are much more moderate. Five red vampires pay 500x your line bet, five yellow vampires or five winged vampire ladies pay 200 coins.

Of the suits, the hearts and the spades pay 150 coins. The clubs and the diamonds pay the lowest of 100x your line bet.

The Bonus symbol is the only symbol of Blood Suckers II that doesn’t pay anything on its own.

The main game of Blood Suckers II has five reels, three rows and a total of 25 paylines. So the base game is pretty simple and the winnings are easy to read.

On the so-called control panel below the reels, you can use the buttons to adjust the bet to your liking. You can select the value of the coins, and the bet level between 1-10 before starting to spin.

In general, the gameplay is very straightforward. Spin the reels, and if you land on a winning combination, the paylines in question will light up and even Amalia throws a small celebration.

There are some special features that can happen randomly; Blood Rose free spins, Hidden Treasure bonus game and Amilia shooting additional Scatters or Bonus on the reels.

Getting back to the hidden room of the bonus game, you will see five chests. By opening them one by one you’ll reveal either a coin win, a coin win and a key or a lurking demon. With a key, you can advance to the next level and a new set of closed chests. If it’s a demon hiding in the chest, it will attack you and the bonus game ends.

There are five stages in the bonus game. If you manage to avoid the blood-thirsty demons and find all the keys from each level, you will win an additional 1,000 coins.

So, the mechanism of the base game is quite traditional and reminds me of some of the older slots NetEnt has made earlier. As it also has a short story behind it, this slot fits nicely with other story-driven games like Dracula, The Invisible man and Witchcraft Academy.

I think it’s already well-established that I love the theme of Blood Suckers II. But does it do well as a slot game? After a few hundreds of spins, I’d say it’s a nicely composed and updated story, that honours the first slot. Maybe you remember that you - we - actually played as the vampire hunters in the first one?

I generally like how the Blood Suckers II uses the same idea for the bonus game as in the first one. The slot also has the same haunting feeling of something watching me from a dark corner. Moreover, I like the more personal touch Amilia brings in.

Blood Suckers II is a low volatile slot with the RTP of 96.94%, so it’s not quite as generous trowing coin wins at you as it’s predecessor. But it does have more nice random features.

Who would be stupid enough to waltz right into the scary castle of vampires? Well… I am. And I’m glad I did! Even when the demons were scratching me with their sharp claws and gnawing my shins, I put on my brave face and marched on.

Blood Suckers II is a beautiful slot and lots of fun, so I dare you to follow Amilia into the dark hallway... The treasure might just be behind the next squeaky door!

Browse casinos with Blood Suckers II and other slots from NetEnt. Create an account and try the game for free before making a deposit.

You can play Blood Suckers II in English, Finnish, Swedish, German and 20 other languages. 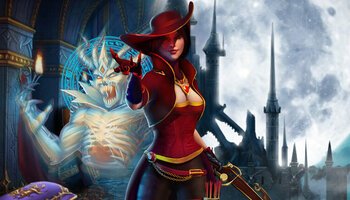