Blood Suckers might just be the toe-curling online slot that you have been craving for. It has it all – A high RTP, blood-thirsty vampires and most importantly, bonus features galore.

This 2013 slot game release by Net Entertainment has seen players flocking to it in droves thanks to its high payout rate of 98%. Bear in mind, you won't be coming across many games with this high an RTP.

This personal favourite has aged well and is now considered a modern classic. It also came out at a time when vampire TV shows and movies were all the rage.

You won’t find any lovelorn conflicted vampires here, however. These feisty symbols are there to shock you to the core with their horrific antics and potential wins.

Although it is one of the older generation of NetEnt games and thus, the graphics aren’t as flashy, or in your face, as you might expect them, it still packs a punch. Each symbol boasts its unique superpower (and payouts), so without a doubt, it can hit all the right buttons, provided you are up for a spooktacular slot.

Each symbol is reflective of the Victorian vampire genre. They are very detailed, and although they seem somewhat cartoonish, they contrast well against the dark background.

When it comes to features, it doesn’t disappoint. Jam-packed with free spins, a Vampire Slaying Bonus feature, multipliers and the chance to win over 1,000x your bet, let’s just say you won’t be able to sleep a wink after playing it.

For once, there are no playing card games in an online slot. Each of the symbols presented in this game is an illustration of something vampire-related. You will come across garlic, potion vials, a bible, a silver cross and an antique pistol and bloodied arrow.

You will also meet some interesting characters, including the female bride and three vampires – A handsome one, a Nosferatu-like one and a creepy-looking long-haired psychic one.

If you put the dangers lurking in the background to the side, you should come out of this alive and perhaps, slightly better off. The base game might be thrilling enough and can reward you with some nifty spins, but it’s the features that truly boost your bankroll.

You can easily collect a tight sum from either of these features, but it’s the Wild symbol that can have a surprising effect on your bankroll. Land five of a kind on an active payline and you could walk away with 7,500x your bet.

Personally, I have never managed to land this, but I did land five of a kind of the handsome vampire, and that was mind-blowing. It’s these little surprises that keep me coming back.

In all my years playing Blood Suckers, the bonus rounds, be it the free spins round or the Vampire-slaying bonus game have proved to be very generous. The frequency of the bonus symbols is also considerably high.

This is a low-volatile game, so it might not be for everyone. High rollers might get slightly annoyed by this. Some players might, on the other hand, find this game dated. You might want to check its successor, Blood Suckers II if you want fancier graphics but you won’t benefit from the same payout percentage.

If you are low on cash and want to boost your bankroll in-between games, I also tend to resort to this game. In my humble opinion, Blood Suckers provides the thrills and the ideal RTP to quench my thirst for all-round entertainment.

Browse casinos with Blood Suckers and other slots from NetEnt. Create an account and try the game for free before making a deposit.

You can play Blood Suckers in English, Finnish, Swedish, German and 20 other languages. 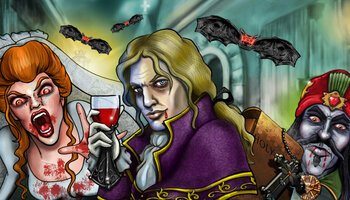