Bloopers are the often funny mistakes made during the creation of a movie or television show that sometimes get added to the end of the film, after the credits. In this Elk Studios slot, the Bloopers get their own turn in the spotlight.

Released back in 2016, Bloopers features a number of special wacky characters that seem to be responsible for the accidents that fill the game. The 5-reel, 3-row playing field is filled with some symbols that remind us of film and Hollywood, and the other ones are simple card letters. I’m not sure why they made this choice as I would guess that there are a lot of things to think of when it comes to bloopers.

The slot has an impressive 243 Ways To Win that should help in getting a win, but the game still stays on High Volatility. The symbols are not animated but the little creatures that appear do move along the screen and do different things which I felt made up for it. Everything also looks really nice but unfortunately, the background is obscured completely by the playing field.

The music is quite classical sounding, fitting the theme of Hollywood in the 40s and 50s. Meanwhile, spinning the reels sounds like a film projector and the jingles for the different features and wins are also made to fit the setting. All in all, I really liked how they used the sound in this slot.

The game features a collection of symbols that are following the normal divide between low- and high-paying symbols. Card letters seem to be a favourite amongst all developers and Elk Studios are no different. I did like they gave the card letters their own literal spotlight but otherwise, their design is quite boring. The more original high-paying symbols look a lot better but are not animated.

While the game offers reasonable rewards for a win, the high volatility still makes it seem rather low. The different features do help in creating some big wins occasionally and I found that my funds tended to stay pretty stable. I did see a sharp drop-off at a certain time though and I never really recovered, so keep an eye on your funds. It’s possible to choose a bet somewhere between £0.25 and £100 per spin, which can diminish the risk. Or enhance it, if you feel so inclined!

Bloopers stays pretty small when it comes to the features but the ones that are there are rather expansive. The features you’ll find in this slot include:

The base game is pretty simple but the Bloopers also turn out during this time. This can positively affect the slot in different ways. I did find that Fix-It would often only shuffle card letters into a win and rarely any of the high-paying symbols.

The Free Spins mode is just an overcharged base game. The Bloopers appear every spin, sometimes multiple ones at the same time. In my time playing, this part of the game helps a lot in creating big wins but it’s not a guarantee. It would often help my funds get back above the starting point but never for very long.

Bloopers is a fun concept with a bunch of characters that a lot of people will probably enjoy, not just for the design but also for their gameplay implications. I also liked the setting itself even though they perhaps didn’t do quite as much as they could have done with regards to the symbols.

The game is quite animated even though the different symbols don’t move much. The Bloopers walk or fly across the screen and the male and female movie stars turn into stacked wilds that are beautiful drawn. It all looks great and even the sound is fitting.

Finally, players might like to know that the max. win is 1,850x your bet which is on par with other Elk Studios slots. It never felt like I was close to getting it as I think it will require 3 or 4 Bloopers to activate during the Free Spins mode plus the Stacked Wilds all creating the ultimate combination.

Browse casinos with Bloopers and other slots from Elk. Create an account and try the game for free before making a deposit.

You can play Bloopers in English, Finnish, Swedish, German and 19 other languages. 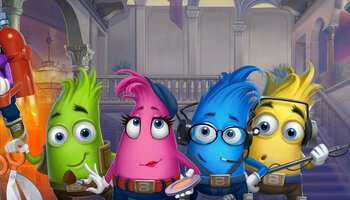