NetEnt is grasping the theme of perennial nuptial drama caused by traditionalist in-laws and nouveau riche newlyweds. Their Bollywood Story slot is a nine payline game that takes players to a Taj Mahal-like interior where the five reels can be spun for a chance to win up to 90000 coins.

The game dates from 2018 but doesn't reflect the high production values that we have come to associate with NetEnt slots. I find Bollywood Story to be a mediocre game at best, but that doesn't mean there are no positive bits that are worth mentioning.

Even though the word 'Bollywood' forms the title, I find it hard to believe that NetEnt didn't include a crazy Desi dance-off as a cutscene. It would have helped the overall look and feel of the game to have that as a transition between the base game and the free spins feature or to celebrate a big win.

Sadly, Bollywood Story has less movement than the Siddhanta yoga posture but compensates for it with a lucrative maximum payout figure. The high-paying symbols are the characters of this imaginary Bollywood Story, but the symbols are just still-life portraits that don't budge the slightest bit. At least there is a soundtrack that sounds alright.

The game comes with only two extra features which fulfil the bare minimum. Even in this respect, Bollywood Story is unappetizing, but I will admit that the wild symbol can redeem for the negatives since it is the only thing that can improve the likelihood for a big win.

Wager amounts are formed by the coin value times the fixed bet of 9, so setting the coin value to 10p equals a total bet per spin of £0.90. The coin value ranges between 1p and £1.00 times 9, however, NetEnt also includes the Level setting in their slots which enables players to raise the bets higher when desired.

In my opinion, NetEnt has given the payouts a fair treatment because the wager is paid back in the same amount or pays more for any outcome, except for three matching royal cards.

Three royals equal 0.3x your bet regardless of the card symbol. The same is true for outcomes consisting of four matching symbols, as these pay 1.66x your bet. Wins with five royal cards pay different amounts, such as 9.99x for five tens and 11.11x for aces.

Over to the other category, wins for three high-paying symbols pay 1x for the lower three (the in-laws and the groom) and 1.66x your bet for the bride and the Bollywood Story game banner. The latter pays the most valuable prize for five matching symbols: 111.11x your bet.

NetEnt has Bollywood Story listed as a medium variance slot, but my feeling is that it is more of a medium to high variance. In my experience playing the game, most of the win outcomes were formed of three royal symbols, with and without the help of the wilds. On rare occasions, there will be a four symbol win. I guess all this is biding your time for the free spins feature, where you get the benefit of at least three guaranteed wilds.

My bottom line about Bollywood Story is, it’s a poorly made, visually unstimulating game that does have a strong side in the floating wilds, especially if you’ve resolved to hold out until the bonus feature. Anything outside that frame is likely going to be meagre wins with an incidental win that’s worth counting.

Should you play the game? I’d say no unless you are fond of Bollywood-themed music and you don’t mind the paternalizing stares of the in-laws.

Browse casinos with Bollywood Story and other slots from NetEnt. Create an account and try the game for free before making a deposit.

You can play Bollywood Story in English, Finnish, Swedish, German and 20 other languages. 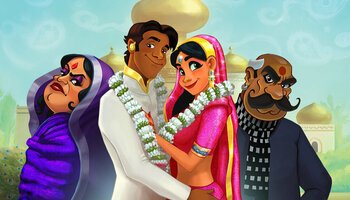