Bombuster brings explosives into a new slot, where different bombs have different effects on this game that tries things a little differently. Besides the Cluster Pays mechanic, Bombuster also features things like Re-spins, cascading reels and non-standard reels.

The game was developed and released by Red Tiger in 2020, showing off a 7x7 playing field that makes use of Cluster Pays to calculate wins. The slot is filled with familiar fruit machine symbols including lemons and oranges, which felt a little odd considering the theme of the game. There are of course also bombs in this slot, but these have special functions and don’t act as regular symbols.

The background of Bombuster doesn’t show anything special, appearing to put us in the middle of a laser box of some sort. There are some animations in the game, most of them associated with the bombs and when they activate. The regular symbols are static and only explode as part of the cascading reels feature.

I found the appearance of the game somewhat disappointing. The idea of bombs playing a major part in the game should have allowed the creators to use more than just fruit symbols and a laser lines background. Alas, it seems that the concept was as far as their creativity took them.

Bombuster has a healthy number of features, considering it has quite a large playing field to fill. Even so, with the Cluster Pays mechanic at play the slot lands at Medium Volatility. You can expect a steady number of spaced out wins, most of them able to make back a few spins but not regularly big enough to have you come out in the positives. To do that, you are required to activate one or more of the bombs.

Whenever there’s a win, the game will show the cluster that triggered the win and show the total amount won. Players can augment their bets by picking one between £0.10 and £40 per spin. As an incentive, the max. win is 2,000x your bet.

The features in the game are all part of the base game. You won’t find any interruptions to the basic gameplay that introduces a bonus game or a free spins mode. Instead, the features are mostly contained within the different types of bombs that can appear on the screen.

The regular features include:

During the base game, different bombs can appear. These appear randomly and each has its own effect:

The game is pretty easy to understand even though the bombs aren’t explained during the gameplay itself. Instead, you are expected to just watch the bombs explode to figure out what they do. Or you can open up the paytable.

As the name of the slot implies, the bombs play a pretty big part in the gameplay. They appear quite often but don’t immediately explode. Instead, they stick around for a set number of spins before exploding. What can happen is for one bomb to set off other ones.

Bombs explode either horizontally or vertically, but it was unclear to me if there was any way to tell which way they were going to explode before they did. Once they explode, the affected symbols are immediately changed.

The gameplay of the slot was pretty fun but not very complicated and you’re mostly watching the bombs explode. Since they’re all coloured you will always be aware of what will happen. That doesn’t mean it’s not fun to see the big wins that occasionally get triggered this way.

Bombuster is an enjoyable slot that changes up the gameplay in some obvious ways and then eases up on introducing additional features. The bombs are a nice way of injecting some randomness into the game while still keeping it simple for the player.

If you don’t mind a slot that has a non-standard playing reel and uses the cluster pays mechanic, Bombuster will likely be a refreshing game that does things differently from most common slots. The bombs are a fun addition and are the most important part of the slot in terms of gameplay.

Players that are more interested in classic slots will likely not be as enamoured, even though the game is simple enough to play and the symbols will be familiar to anyone. I would recommend it if you want to try something new, but otherwise, it’s pretty forgettable.

Browse casinos with Bombuster and other slots from Red Tiger. Create an account and try the game for free before making a deposit.

You can play Bombuster in English, Finnish, Swedish, German and 17 other languages. 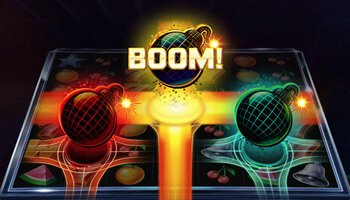