Bompers is the silly title for a quite inventive slot that takes some of the aesthetics of a pinball machine while giving it a distinct vibe. The slot further features cascading reels, a non-standard playing field and up to 262,144 paylines.

This slot was developed and released in 2021 by Elk Studios. This developer has been working on diversifying their portfolio and that includes releasing some less classic designs. Bompers is one of those games, which doesn’t completely get rid of the usual video slot gameplay but does try some new things. The game features a 5-reel, 4-row playing field that can expand into a massive 5-reel, 8-row playing field through its cascading reels mechanic.

Although the game looks like it uses the Cluster Pays mechanic it actually does still use regular paylines but in such a way that players can get wins with between 4,096 and 262,144 bet lines. Wins are calculated by having the same symbol on consecutive reels. When there’s a win, the symbols involved light up before dropping away.

The symbols used in Bompers are unfortunately a lot less original, using familiar images like BAR, Sevens and different types of fruit. I’m not sure why the designers decided to change up the appearance of the slot but then to stick with the most familiar symbols from classic fruit machines. Perhaps they didn’t want to overwhelm the player.

Bompers has a regular-sized playing field for most of the time but since it can grow to double its size with the right wins at the right moment, the game has to reserve a lot of space. This means that the symbols on the screen are smaller and there is a lot of empty room most of the time. In the background, we can see some vague shapes that reminded me of a pinball machine, which is probably also where the name is coming from.

When it comes to the design of the symbols it all looks fine. The studio’s creativity isn’t on full display here but they look distinct enough to easily see when a win is achieved. Since the payouts for a single win are very low, the playing field is large and there are a big number of paylines, the game ends up with High Volatility.

Players that enjoy this volatility can pick a bet that’s somewhere between £0.20 and £100 per spin. The max. win of 5,000x your bet is something that I’ve seen a lot on similar slots with the same volatility so even though it’s a big potential win, it’s about average when compared to other slots.

Bompers does some things differently while keeping other elements of the slot the same. These features all mix together. A quick overview of the features includes:

The game has a number of features that spice up the gameplay somewhat but I do wonder about their effectiveness. The ideas are all pretty solid but during my time playing my funds dropped down steadily and only very rarely got a hike up so be aware of that.

The Mystery Bomb and the Shooting Star are separate symbols in the base game that have to appear on the screen in order to activate. These symbols are rare and can be quite lucrative but in my experience, they usually aren’t. Getting the Bomb symbol adds a random symbol in a ring around itself which can generate a big win but more often does nothing.

It’s the same problem with the Shooting Star symbol which generates a grouping of random symbols that drop down onto the reels. Since they’re all random, it’s impossible to tell if it’s going to be a win or not beforehand.

Bompers is a slot that deserves some credit for trying to slightly change the format without actually straying too far into experimental territory. The game gives players some new features to play around it while the basic gameplay elements stay the same as most classic slots.

If you are looking for something slightly different than the standard video slot but you don’t want to have to do a deep-dive into the paytable to figure out how it works, I think Bompers is a good alternative. There is plenty to see and do, some of the features are pretty unique but you don’t have to worry about clusters or other such features.

I thought it was a good attempt by Elk Studios to do something new even though the volatility was a bit too high for my tastes and I couldn’t get any big wins during my time playing. As it’s different for every player, I’ll leave it to you to see how it goes for you.

Browse casinos with Bompers and other slots from Elk. Create an account and try the game for free before making a deposit.

You can play Bompers in English, Finnish, Swedish, German and 19 other languages. 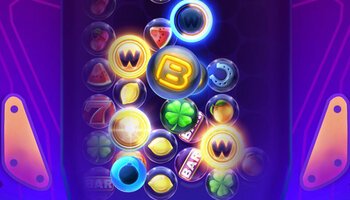