Bonnie and Clyde were perhaps some of the most infamous gangsters in America to ever terrorise the countryside. Join their violent spree and try to get away with the loot.

This slot was developed by relative newcomer Red Rake Gaming and released in 2019, making it brand new. The game is set during the 1930s when the criminal duo Bonnie and Clyde sped through the Midwest of America, robbing and killing. In the same vein, the slot tries to capture that sense of violence and adventure. The 5-reel, 3-row playing field with 50 paylines stays true to the classic slot layout but has some surprises to shake things up.

The first thing to jump out is always the graphics and it’s no different here. Although they do look a little outdated already because of the smoothness of the 3D graphics, they captured the style very well. The symbols are sharp and lightly animated, while the background shows a desolate American prairie to set the mood.

I was pretty impressed with the sound design as the developers leaned heavily on the 1930s aesthetic. The music reminded me a lot of the swinging Jazz music from that era, while any Wilds on the screen would result in a cacophony of gunfire and spent bullet casings hitting the ground.

The game has a bunch of parallels with Cops ’n Robbers by Play ‘n GO. It takes the concept of high-stakes criminal adventures and puts them into an energetic slot that spurs players on with suiting images and a fitting soundtrack.

Bonnie and Clyde has symbols that are reminiscent of the robbers and their tools, but its also filled with card suits to fill up the library. The character symbols are actually well done, with some nice animations and appropriate sound effects. Meanwhile, the card suits are very simple and aren’t really made to fit the theme.

All the symbols have a slight animation when they’re part of a win except for Clyde. When there is a full reel of his symbols it turns into a special stacked symbol and you’ll see him fire his Tommy gun. I thought that looked really cool and wished they had added more of that sort of thing to the game.

Bonnie and Clyde is a pretty simple slot when it comes to the features. There are only a few but they work well together and I felt they added something substantial to the experience.

In short, the features are:

The features aren’t very difficult to understand and I think most players will have seen them in some variety before. The free spins mode can become a pretty big part of the game since there are different quantities of free spins associated with the Scatter Symbol. If a Bonnie symbol has +50 free spins on it, that’ll grant the player an extra 50 free spins to play with. During my time playing, I never saw that specific symbol though.

The Clyde symbol works differently in that it’s a Stacked Symbol filling the entire reel and counting from both ways. It makes it pretty likely to get a win with this symbol plus it has the biggest payout. I also liked that it expands into a special animation that the game could have used more of.

Even though this seems very simple, both features showed up frequently enough to feel like an intricate part of the slot. They’re quite different from each other, just like the real Bonnie and Clyde, but still cooperate well together.

Bonnie and Clyde is a slot that at first glance looks a little outdated. The graphics aren’t up to par with the bigger developers but it’s clear they put a lot of attention into it and were trying to create something original.

The features are pretty basic but fit the theme well and giving the two main characters their own features was a nice way to differentiate between them. I wish there had been a feature that somehow brought them together but alas.

The game has a listed Medium Volatility which felt pretty appropriate. The player can choose to bet between £0.20 and £50 per spin which makes it possible to get bigger or smaller wins depending on what you’re comfortable with. The max. win is 1,223x your bet which is quite a big number for a medium volatility slot.

As someone who’s always been attracted to high-end graphics and unique features in my slots, Bonnie and Clyde didn’t quite scratch that itch but it definitely gives an enjoyable classic slot experience. If you’re interested in seeing what newer developers are up to, I think Bonnie & Clyde gives quite a good impression!

Play Bonnie and Clyde for free

Browse casinos with Bonnie and Clyde and other slots from RedRake Gaming. Create an account and try the game for free before making a deposit.

You can play Bonnie and Clyde in English, Finnish, Swedish, German and 19 other languages. 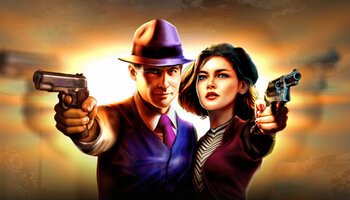