Book of Gods is a slot that’s set in the mythical version of ancient Egypt where the gods actually do walk amongst us mortals. The game further lets players enjoy stacked symbols, free spins and the ability to activate the free spins mode when they choose to.

This slot was developed by Big Time Gaming and released in 2018, which somewhat surprised me because of the standard appearance. The drawings are sharp but not very original, nor are they very big. The 5-reel, 3-row playing field does not take up a lot of room on the screen, giving more than half the available room to the background and the menu buttons. I think that was a rather odd choice, as the symbols seem a little too small now.

When it comes to the originality of the slot, unfortunately, it also doesn’t really impress. The low-paying symbols are simple card letters in rather garish colours while the high-paying symbols seem to depict the standard fare of Egyptian characters. Another downside is that the game is very light on animations. This might not be a terrible detractor for a lot of players, but for me, it always means the game feels a lot more static.

Does the game at least grasp the Egyptian setting? It does alright in my opinion, with the background showing the Nile and the pyramids in the distance. The water can be seen to move but other than that there is no movement. In front of the playing field, we’re treated to the sight of what appears to be a temple and a book that flips every spin to show the symbol that could become stacked.

Book of Gods uses a lot of symbols that aren’t exactly bristling with originality, especially the card letters feeling like an ill fit to the theme. I don’t know why the designers didn’t just go with hieroglyphs to make up the low-paying symbols. It would also not have been very creative but at least it would have kept with the theme.

The slot has quite a large number of different symbols, but there are some features that help create bigger wins. As a result, the game lands on Medium Volatility. The slot comes with a respectable 243 ways to win, which revolves around the same symbol appearing on consecutive reels from left to right.

When it comes to the symbols, they are in descending order:

Players that are looking to find out the game’s volatility or who prefer smaller or larger bets can adjust those at will. The game allows the players to choose a bet between £0.10 and £500 per spin. Meanwhile, the game offers a max. win of 4,860x your bet which is quite considerable considering the volatility.

Book of Gods uses only a few features but they can have a pretty big impact on the gameplay and the player’s ability to get wins. The free spins mode can even be activated at will by the player for a price.

Playing this game will mostly have you look at the base game, assuming you don’t activate the free spins mode manually every time. The base game mostly features simple spins that occasionally cause stacked symbols to appear. One unique thing about the slot is that payouts occur even with two-of-a-kind wins.

This essentially means that when the book shows a symbol and that particular symbol appears on the screen at least twice, they will turn into stacked symbols and award a win. These stacked symbols do not need to be on consecutive reels and will count as a win anywhere on the screen. Obviously, as a result, the payouts are very low as it is likely for the game to award 3 or more wins at a time this way.

The free spins mode was hard to trigger, but whenever there’s a win the cost of triggering it manually will go down. As long as the player has a bigger return than the cost of activating it, it should be okay but in my experience, that didn’t really happen.

Book of Gods is a standard slot with a standard setting that looks older than it is. Why the developer chose to focus on such a classic look might have to do with the target audience: people who don’t care about the looks and just want to play a relaxing slot. In that case, the game offers what it sets out to do.

The features in the game are rather interesting even though they bring very little in terms of funds. Players have a pretty wide range of bets they can pick but I would advise against rolling too high as the medium volatility does not really do the game justice.

When I was playing, my funds took a steady dive down and never recovered, even when activating the free spins mode manually. The resulting total win was less than half of what it cost me to activate it, merely speeding up my loss in coins. Obviously, this will be different for other players but I would suggest you take it slow.

Play Book of Gods for free

Browse casinos with Book of Gods and other slots from Big Time Gaming. Create an account and try the game for free before making a deposit.

You can play Book of Gods in English, Swedish 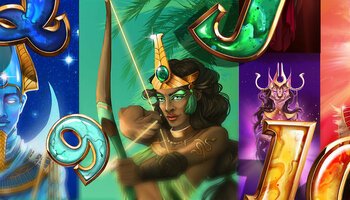