Book of Toro brings back the bull from ELK Studios in a new slot that combines the animal with Egyptian antiquity. The slot gives us a number of interesting features to play with, including a free spins mode, wilds and stacked symbols.

This slot was released in 2021 and makes sure to show off the work of talented designers. The game looks very colourful and lively, it even has the rampaging Toro as it does in the other slots with the bull. The Egyptian theme gets a lot of room to shine here with the background covered in various vases, pillars and sarcophagi. When looking at the different symbols we also see the similarities.

Players will be playing on a 5-reel, 3-row playing field with a tidy 10 paylines. This game doesn’t make use of the popular Megaways feature or even the Cascading Reels we see so often. As a slot, it comes pretty close to a classic game. There are a few exceptions though, which include the stacked symbols I’ll talk about more later.

With regards to the sound design, I’m afraid there isn’t that much to say. Even though the quality is excellent, the studio decided to lean heavily on the Egyptian theme. That means a pretty standard soundtrack making use of the familiar tones that are found in other slots with the same setting. This does sound like an original song but it sounds very similar to what we’ve heard before.

Book of Toro tries to bring the Egyptian culture to life by making use of various famous symbols and designs. The low-paying symbols are still the usual card letters but they have been redesigned slightly to fit the setting better. The other symbols portray the usual fare, from scarabs to mummies and the eye of Ra. It all looks very well done but it isn’t a shining example of creativity.

When it comes to gameplay, players should be ready for High Volatility. I found it to be quite punishing with only the occasional win, and even those were often not big enough to make back many spins. The slot heavily depends on getting a number of wins at the same time. The walking wild can help with this, but unfortunately, it’s increasingly rare. As a result, the RTP of 95% is well below average.

Players that decide to take on the challenge can augment the risk slightly by picking the size of the bet. As usual, this game allows players to choose a bet between £0.20 and £100 per spin. The larger the bet the larger the win, but it will also drain their funds faster. The small number of players that manage to hit the jackpot will walk away with a maximum win of 10,000x their bet.

Book of Toro has a few features that change the gameplay in different ways. I thought they were pretty entertaining but very tricky to get them together which is where they really shine. The features include:

If you are aware of the other Toro slots then you will know largely what to expect. The biggest selling point of these games is how the Toro Wild will rampage across the screen if the right symbol is present on the playing field. In this case, the Toro will race towards any Mummy that it sees. While moving across the screen it will leave Wilds in its wake.

Another benefit is that every move the Toro makes will trigger a re-spin, and thus not count towards your regular spins. If there are Scatters on the screen, those will remain as long as the re-spins are active. This makes it more likely to activate the free spins mode.

Book of Toro is very clearly the next instalment in the Toro series, even if it takes the bull back into antiquity. The design is very well done. My biggest complaint is that the Egyptian setting feels very overused, and even here there is a distinct lack of originality. If not for the bull, this slot would be almost indistinguishable from all the others set in ancient Egypt.

When it comes to the gameplay, fans of the Toro slots will find more of the same here. That’s not a bad thing as it feels very enjoyable. It was difficult to get a Mummy and the Toro on the same screen. For me, I had the free spins mode trigger more frequently than the re-spins.

Players looking for something wholly original or a classic slot will want to miss out on this. Everyone else is likely to have a good time with this game. Just be aware of the high volatility and the relatively low RTP.

Play Book of Toro for free

Browse casinos with Book of Toro and other slots from Elk. Create an account and try the game for free before making a deposit.

You can play Book of Toro in English, Finnish, Swedish, German and 19 other languages. 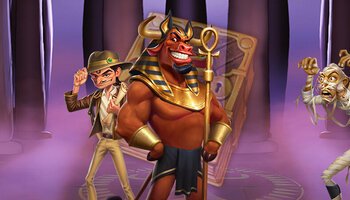