Boom Pirates brings the player to a little village that is flanked by the ocean as a pirate ship approaches and starts its attack! The game features a non-standard playing field, more than 10 million paylines and a free spins mode.

Developed by Foxium and released in 2019, this slot is still one of the newest games in this studio’s library. The graphics show this up to a point, where their tendency to use 3D graphics has already begun to show its age somewhat. Due to the size of the playing field, however, the tiles are small and details are hard to see. The player will spend most of their time looking at a 5-reel, 4-row playing field but it can expand out to a massive 9-reel, 6-row playing field.

As far as the setting goes, Foxium really embraced the pirate theme. The player is looking down at the sight of a little town next to the sea, with a pirate ship off the coast. The story immediately becomes clear this way, and some of the features also interact with the background. When it comes to the symbols on the reels, we can find the usual low- and high-paying symbols. The card letters that act as low-paying symbols are unfortunately rather bland and simple.

With regards to the music, the game does attempt to keep things appropriate for the setting. The music isn’t too original but it evokes the right time. There are also different sound effects when features or wins are triggered. The game has between 1,024 and 10,077,696 paylines to get a win on.

Boom Pirates makes use of a collection of 3D art to fill the high-paying symbols. This includes stuff like parrots, cannons and different characters. They weren’t animated when part of a win but they still managed to help set the mood. When it comes to animations, the biggest one is the pirate that sometimes swings into view to turn random symbols into the same symbol. Another thing that can happen is a cannon barrage that expands the playing field.

Getting a win isn’t as easy as you would think considering the large number of paylines. This is mostly due to a large number of symbols, the rarity of the features and the low payouts. Because of this, the game is listed as High Volatility which fit my experience playing the slot. While it wasn’t too hard to get a simple win, these would be so small they wouldn’t even pay back a single spin.

As a result, I would advise new players to start off with a low bet. The game allows for this, offering the possibility to change your bet between £0.10 and £30 per spin. As a reward for playing the game, there is a potential jackpot. This max. win of 3,000x your bet is actually a bit low compared to other slots with similar volatility.

Boom Pirates has quite a few different symbols, including:

Boom Pirates includes a small number of different features that work side by side and don’t really interact with each other. Some of the features are activated randomly, others require special symbols on the screen.

Even though the game advertises that it has more than 10 million paylines, this will prove hard to benefit from. The slot will only show the full screen with the Boom Pirates feature, which can only randomly trigger during the base game when there is no win. The free spins mode will allow random tiles to activate but it will be unlikely you’ll get to play with the maximum size playing field.

Speaking of the free spins mode, I found it extremely hard to activate. Even though it only requires 3 Scatters on the screen, the game did not give me more than 2. I had to activate the Foxify feature which can increase the possibility of a feature activating for 50% extra cost per spin. I didn’t think this was worth it, as the volatility is still very high.

Boom Pirates is a slot that makes clever use of its setting to create a nice-looking and playable game. Unfortunately, the graphics have already begun to look somewhat outdated as well as offering little in the way of animations or interesting views.

The gameplay was very hit-or-miss for me, as the features that are there are interesting on paper but prove very difficult to activate. When they did get triggered, they often only had a minimal impact on the gameplay and barely influenced my funds.

Players can use the Foxify feature to force a mechanic to activate but the added cost only makes it harder to get a win out of this. Keep that in mind if you want to give this slot a try. If you’re a player who likes standard slots with a twist, this game will likely entertain you for a while. Do you prefer something closer to the classic experience, it will probably not appeal as much.

Browse casinos with Boom Pirates and other slots from Foxium. Create an account and try the game for free before making a deposit.

You can play Boom Pirates in English, Finnish, Swedish, German and 23 other languages. 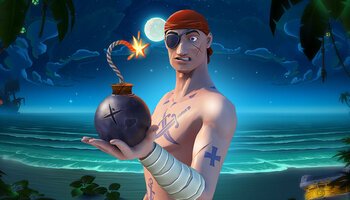