Slabs of black granite, golden frames and diamond-encrusted sevens remind me of a classical slots machine regalia that rings with nostalgia and summons some players back to the good old days of 1980s Vegas.

In essence, Booming Bars is as classical as they can get, but it fits a specific time frame and comes with a particular finish so that it stands apart from any retro-looking, three-reel slot machine.

The game comes with three reels, three rows and 10 fixed paylines, so everything is laid out for a decent igaming adventure, as long as you aren't expecting more than what Booming Bars can provide.

I've given the game several dozen low-cost spins to get a feel for the gameplay and the payout potential and I can say it suffices enough, but doesn't go beyond this basic threshold in terms of entertainment value.

Booming Bars has been incorrectly named, I think. The game should be called Booming Sevens because the assortment of BAR symbols doesn't trigger the most lucrative payouts. The sevens look prettier too as they've been designed with a diamond finish and have more appeal than the steely BARs.

I am not impressed by the graphic design, nor do I think that's the point here. The look and feel of the game are very basic and there is little in terms of animation. I guess the intention of Booming Games was to mimic some of the slots machines from the 80s that are different from run-off-the-mill fruit machines.

Yes, there is some glitter around the diamond sevens and the BAR symbols radiate this light from behind the lettering, but that is really it. The game is meant to play at a slower pace and I am sure that there are players who can appreciate that. Keyword here is 'nostalgia'.

Both the gameplay and the extra features remind me of another game by Booming Games that I am familiar with - Doublin Gold, which is an Irish-themed slot and which I find a lot more lively than the game at hand.

The other feature that makes the game different compared to classical retro and fruit-themed slots is the Mix 'n Match approach to making winning outcomes. Players need three matching symbols for a win, but that's only true for one part of the paytable.

Many of the winning combinations pay for a mixed bag of symbols, that is, any purple, any red and any white symbol can pay 3x, 2x and 1x your payline bet. Any three BAR symbols can pay 5x and any three sevens can pay 75x your payline bet.

Players should keep in mind that Booming Bars is low variance slot, so the payout potential has been confined within the 50x your bet mark unless you get a sequence of purple, red and white sevens on a payline and the wild substitutes for any of these, in which case the payout is 80x your bet.

Needless to say, the game has some merit to it. It is low key, low variance and can be played with as little as 10p per spin (£500.00 is the maximum). I think most players are not going to get a kick out of it but few will find the Mix’n’Match feature appealing as the math model can keep up a rather narrow frequency between the payouts.

Browse casinos with Booming Bars and other slots from Booming Games. Create an account and try the game for free before making a deposit.

You can play Booming Bars in English, Finnish, Swedish, German and 23 other languages. 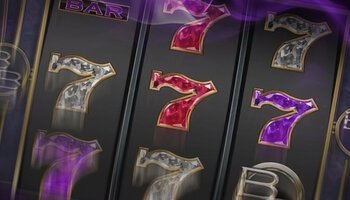