Booming Circus has us put on the giant shoes, pick up the whip and head into the giant tent as we entertain the public with our circus acts!

This slot is set in the circus, placing us at the entrance looking in as different elements scroll by. Developed by Booming Games and released in 2019 it attempts to bring us into the circus mood and I thought it did a pretty good job!

The game is made up out of the standard 5-reel, 3-row playing field with 15 paylines. It seems that Booming Games isn’t very interested in shaking things up as that’s the only size playing field I’ve ever seen them use. It’s understandable of course, it’s highly popular and offers enough gameplay options to stay interesting.

In terms of theme and character, the game does a good job of setting the mood. I thought the graphics were pretty impressive compared to their other games and they made me feel like I was really in the circus. The symbols are all original and the high-paying symbols are slightly animated.

The background shows us standing at the fairground with small details for extra realism. Unfortunately, there were no animations to be found there. They’re not really required of course but I find these do help in breathing some life into a game.

The music comes up slowly as you spin the reels, playing up-tempo circus music. Although it’s not very original it does help in setting the mood again. When the high-paying symbols are on a winning payline, they’ll play a short sound clip depending on the animal that is on the symbols.

Booming Circus has a range of original symbols that are all related to the circus. The high-paying symbols are different types of animals while the low-paying symbols are random objects you would find at a circus. I’m always happy to see developers go out of their way to avoid the standard high card and card suits that are often a detriment to the setting.

The different symbols are pretty nice looking, especially compared to the graphics of other Booming Games slots like Gold Vein and Pirate Booty. The game has only a small number of symbols but is still listed as having High Volatility, which fits my experience. There aren’t a lot of wins and they’re generally not very big. Only during the free spins mode did I see my funds grow in any significant way.

If you’ve ever played Pirate Booty, you’ll note that many of the features are the same. For clarity’s sake I’ll start with a quick list:

In my experience, during the free spins mode, reels 3 and 4 were most often filled with Stacked Wilds, while during the base game, this took place on reels 1 and 2. I don’t think this was intentional or mandatory, but it’s something I noticed. They would often help facilitate a win but it wasn’t always a big win.

The Free Spins mode activates by getting the word CLOWN spelt across the screen. This required all 5 reels to have a letter, which made it pretty unlikely. At the same time, once it activated I’d only get 7 free spins which seemed rather low considering the relative difficulty in getting it to activate.

Maybe Booming Games calculated that with a guaranteed Stacked Wild every spin during the free spins mode, the wins would get very big but that wasn’t my experience. They would be quite sizeable but often nog enough to compensate for my spending it took to get into the free spins mode.

I found the features to be rather dull and inconsequential. This seems to be a recurring problem in Booming Games slots, where there are some interesting features that really don’t pay off enough to make it worthwhile.

Booming Circus is one of the better-looking slots created by this developer. The game has nice drawings that are amplified somewhat with the special animations. The background is detailed, although difficult to see. I liked that the special feature during the free spins had the trumpet visually showing me which reel was picked to be filled with Stacked Wilds.

Other than that, the game kind of disappears into mediocrity. It’s a fine game that does very little in terms of innovation or even differentiation. It sticks close to the average of what I’ve come to expect from slots. A few basic features, some impressive graphics and animations, a soundtrack that fits the theme but none of it really standing out.

If you’re interested, you can pick a bet between £0.15 and £150 per spin to see what works best. The max. win of 733x your bet is again pretty low compared to other slots and not really worth the effort.

I wish I could be more positive about this game. It seems like Booming Games put time and effort into its development, and there’s nothing innately wrong with itself. I just didn’t really get anything out of the game that sets it apart from any other slot.

Browse casinos with Booming Circus and other slots from Booming Games. Create an account and try the game for free before making a deposit.

You can play Booming Circus in English, Finnish, Swedish, German and 22 other languages. 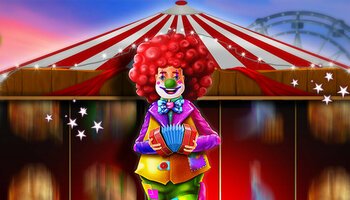