Brazil Carnival brings us into the sprawling nightlife of Rio de Janeiro during Carnival, where we are treated to a set of lovely ladies that watch us play with this dice slot, complete with Wins Both Ways, Wilds and Free Spins!

This slot was developed and released by Mancala Gaming in 2020. Even though the game is mostly filled by the 5-reel, 4-row playing field, we do get to see the city skyline in the distance and two authentic Carnival dancers. Both of the women are very nicely drawn as well as slightly animated to make them seem alive, but unfortunately, they don’t do much else than standing there. Nonetheless, I think it adds to the atmosphere of the slot.

The appearance of the playing field itself isn’t anything to write home about though. All the symbols that were in the original slot are back, but this time imposed on apparent dice. I’m not sure what the appeal is here but considering a lot of slots are released in a dice form, I’m guessing there are players that like this format. Getting a win on one of the 25 paylines will trigger a quick animation where the dice turns to show the entire symbol.

As can be expected from a slot set during Brazilian Carnival, this game features the standard Brazilian music that features maracas and trumpets. It all sounds suitably festive and adds to the atmosphere, but it’s not very original either. Regardless, the setting makes it almost mandatory that they use this music so I’m glad they did.

Brazil Carnival features a basic selection of symbols that can be divided into high- and low-paying symbols. The larger playing field and the average number of paylines cause it to come with Low Volatility. Players can change the wins somewhat by picking a bet between £0.25 and £22.25, but you should be aware that you play with coins which makes it harder to tell how much actual money you are using.

The game felt pretty easy while playing it, meaning I got wins rather regularly but even though the list above shows some big payouts, getting longer wins was actually quite hard. Most of my wins were simply three-of-a-kind, which paid out a lot less. Nonetheless, the game features a max. win of 2,555x your bet which is a sizeable jackpot for a game with low volatility.

When you play Brazil Carnival, you won’t have to deal with a lot of features but these still include a bonus game and free spins. It makes the game feel a bit more varied than other classic slots, where the standard gameplay is spiced of quite regularly. The features include:

The base game plays like most slots that exist, with the occasional Wild showing up to help in creating a win. Most of the time, the reels spin as expected. It was a nice addition to include the Pays Both Ways mechanic, simply because it makes wins a bit more likely.

Getting a single Treasure Chest symbol will activate the bonus game, which shows 5 cards that the player can pick from. After selecting a card, it is turned around to reveal the coin win it holds. This win is then awarded immediately and the game resumes.

It’s also possible to select a number of Free Spins which immediately triggers that mode. I liked this element but I would have liked to see a slightly different background or something. As it stands, the cards simply show up over the playing field.

The other major feature is the Free Spins mode, even though it plays exactly the same as the base game. Players receive a number of free spins depending on the number of symbols they get on screen, as long as it’s 3 or more.

Even though the gameplay is simple and the features are familiar, Brazil Carnival plays well. It won’t hold any surprises for all but the newest players but why change a winning team? The features are popular for a reason, and in combination with a fun theme, the game offers enough to entertain most people at least for a while.

Players that are looking for a standard slot that offers the usual elements in a game, will have a good time with Brazil Carnival. The art isn’t spectacular when it comes to the symbols but the two women are drawn well. The setting is also carried throughout the game, making you feel like it’s actually the carnival.

The features won’t offer you any big surprises but they don’t really have to be lucrative. You’ll get to pick a coin win sometimes, Wilds show up often enough to be interesting and the Free Spins are a nice addition without taking up too much time.

It’s one of those games that I don’t think many people will remember a few months from now, but having played it will still offer most players a solid experience and that’s what counts!

You can play Brazil Carnival Dice in English, Swedish, Spanish, Italian and 4 other languages. 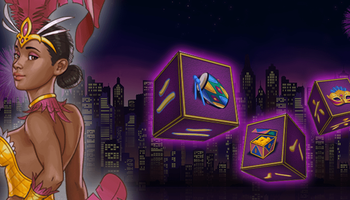