Break Da Bank Again Megaways is the successor of the original Break Da Bank which came out in 2008. It was a favourite for many players for years but finally, it was decided to update the game with a new iteration. This one includes the special Megaways feature.

The newest version of the game is made by the newer developer Gameburger Studios, which I had not heard of until now. Nevertheless, their attempt at bringing this fan-favourite a new breath of air seems to have worked out well. This game makes use of the popular Megaways feature, which means that each of the 6 reels will have a different number of rows every spin. As a result, the slot can have up to 117,649 paylines on the screen.

In this 2021 game, the premise is the same. You are trying to literally break the bank and get inside to its cash-filled content. The background shows us this vault and the stacks of dollar bills, while the reels themselves are filled with various items we associate with banks and money. It all looks pretty good but you shouldn’t expect too much in terms of animations.

The slot also comes with a relaxed but nice-sounding track that mostly features a drum and an electric guitar. I suppose it doesn’t really fit the theme as much, but I would be hard-pressed to come up with something associated with the setting as well! It does liven up the game a bit and I kept it on as I spun the reels.

When it comes to the gameplay, players can expect a High Volatility slot that does not reward players often. With an RTP of 96.15%, it does manage to keep the return to the player about average. I found that this meant I would get a win semi-regularly but it was often not enough to make back my bets. For that, I needed to hit the bonus game and get a big win there. This wasn’t very easy though, and as a result, my funds dropped pretty fast.

Players can deal with the volatility by picking an appropriate bet. They have the choice between £0.20 and £20 per spin. It’s a bit limited when compared to other games. However, the maximum win is 24,185x your bet which obviously makes up for a lot. Hitting the jackpot isn’t going to be an easy task. If you do manage it, even with a low bet you will walk away with a considerable sum.

Break Da Bank Again Megaways has a number of features but they don’t alter the base gameplay too much. It would help if you already know the Megaways feature already though since most of the game is built around it.

To start with, a quick overview of the functionalities:

I found the gameplay that this slot offers to be quite entertaining even though there isn’t that much to do. Most of the features included in the game are passive. The Megaways functionality is obviously very popular but is extremely random. Even when it does pan out, the payouts are too low to make a difference.

It meant that I was very dependent on the stars aligning to get any big wins. A 5x multiplier wild is vital, but in the base game, those only appear on the extra reel at the top of the screen. It’s possible to activate the free spins mode manually, but the cost for this was so high I barely ever made it back.

Break Da Bank Again Megaways is an attempt to update the 2008 classic but I don’t know if they really succeeded. The developers introduced new elements that give it some originality but is that really what players want?

The graphics and presentation are obviously improvements to the decade-old slot. I would have liked to see some more creative use of the template, with a less direct reference to the bank and money. If it was meant to be taken so seriously, why is it ‘da’ bank and not just ‘the’ bank? It’s just nitpicking but it stood out to me.

When it comes to the gameplay, I can’t say it’s bad. I doubt many people will really gravitate towards it over time as they have with the original though. If you’re a fan of the classic slot you might want to give it a try, but for people unfamiliar with the game there are better games out there.

Browse casinos with Break da Bank Again Megaways and other slots from Gameburger Studios. Create an account and try the game for free before making a deposit.

You can play Break da Bank Again Megaways in English, Finnish, Swedish, German and 20 other languages. 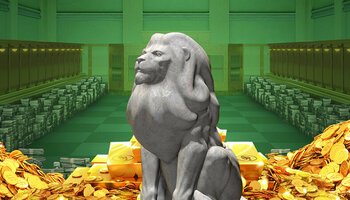