Buffalo Hunter takes us back to the plains of the Wild West when the buffalo still roamed those areas without much worry for the hunters that were coming from Europe. The game features free spins, a bonus game and multipliers that change up the gameplay.

This slot was originally released in 2020 by the growing studio Nolimit City, which really shows off their ability to create some interesting visuals. The setting is clearly visible throughout the entire game, with the background showing us a low-angle shot of the plains with mountains in the distance. The 5-reel, 4-row playing field is encased by wood, with special trackers to the side showing off different animals as if they were carved in the logs.

The symbols in the game follow the standard convention of being divided into high- and low-paying. The high-paying symbols include different animals found in the Wild West, while the low-paying symbols are card letters that are only slightly adjusted to fit the theme. There are no real animations with the symbols themselves but when there’s a win they do shine and grow a bit while the payline glows if you get a win on 1 of the 40 paylines.

When it comes to the sound, the game delivers a similar experience. You’ll hear a calm native song playing in the background that increases in tempo when the bonus game or free spins mode is activated. Wins trigger a simple jingle and you’ll occasionally hear a hawk scream to further fill out the setting. All in all, a very good job by the sound department in my opinion.

Buffalo Hunter ironically does not include any hunter symbols, instead, it’s filling the reels mostly with animals that you’d find on the plains or the surrounding mountains. These animals are all hand-drawn and look very realistic. As I said before, it’s a shame there aren’t any animations because I think those could have helped bring them to life. The card letters are only slightly decorated with things like feathers and a cowboy hat. Not enough to really integrate them into the theme.

Players who want to give this game a try should keep its High Volatility in mind as this can affect the results. I found the slot to be rather thin with handing out wins, and even when they did trigger they were often not very big. As a result, my funds would often take a rather steady dive until one of the features was activated.

It’s always possible to try and mitigate the risk somewhat by adjusting your bets. Players can pick a bet between £0.20 and £100 per spin, which will either make your funds last longer when you go for the small bets, or make the big wins bigger if you go for the bigger bets. It’s all a matter of judging how far your funds are going to take you.

The symbols in the game meanwhile include:

Buffalo Hunter keeps things rather simple when it comes to the number of features but it made some interesting decisions in how to implement them. The features include:

Although I thought the features were quite interesting, I had extreme difficulty getting the free spins mode to activate. I even had to play the game for longer than I usually would have just to see it trigger once. When it does, players get to pick between 1 of 2 special features that are active at the same time.

The Buffalo Horde feature is less volatile but will award wins more often as it turns other animal symbols into themselves. Meanwhile, the Prairie Multipliers will take more Buffalo symbols to activate and even then it requires the animal with the multiplier to appear in order for the player to benefit from it. As a result, you will be less likely to get a win from it but when it does, the win will be bigger.

Once I did activate the free spins mode it worked as advertised but it didn’t really blow me away either. I made back a couple of dozen of spins but considering the time and effort it took me to activate the feature, it might have been too much to really help me recover my losses up to that point.

Buffalo Hunter looks very nice and did a good job transporting us back to the prairie in the Wild West. The complete lack of any human characters, native or cowboy, did make the title a little odd but it didn’t ruin my immersion.

The gameplay is solid enough to keep me engaged while I play but after a while, I got frustrated as I was unable to activate the free spins mode. Because of this, most of the features that are in the slot were not available to me.

Once I did activate the free spins mode I did see the appeal of the features but they were maybe a little too hard to get to for them to be worth it. Finally, the max. win of 12,647x your bet is a sizable reward for those willing to stick it out.

Browse casinos with Buffalo Hunter and other slots from Nolimit City. Create an account and try the game for free before making a deposit.

You can play Buffalo Hunter in English, Finnish, Swedish, German and 12 other languages. 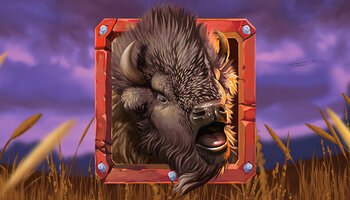