Play Bull in a China Shop

Smash all your preconceptions of slot themes with Bull in a China Shop. This 5-reel, 3-row slot with 20 paylines brings with it a cheeky narrative and a host of different features which will keep any slot player engaged.

Everything about this game screams fun. The main character of the game, the mischievous animations, even the FX will bring a smile to your face. The only thing I’m not a big fan of is the soundtrack which might fit well with the theme but the fast pace, almost angsty melody of the classical music wore off quite quickly.

All symbols have been beautifully designed. They are pleasing to the eye with their vibrant colours and cutesy animation which follows every win.

There are also another 4 lower-paying symbols that feature incredibly beautiful intricate designs featuring card suits. The blue spade and yellow heart dishes yield 1.5x, whilst the red spade and green club dishes yield 1x with five-of-a-kind on a payline.

It is nice to see a game taking the time to create such exquisitely detailed symbols.

For a game that is classed as medium volatility, I found myself entering bonus levels and gaining a good amount of coins from them. There is an option to choose which bonus round you’d like to go for and this does affect the volatility of the game. With the Proud Bull, I only won 33x, whilst with Happy Bull, I won 98x. However, I believe the real potential lies with the Angry Bull. From the 10 spins, I only received the Angry Bull twice, and the multipliers were only set at x2 yet I still walked about with a win of 135x.

The number of symbols including the Wild and Scatter stands at 11 which is on the low side. This means you are more likely to get some nice wins during the base game. I received quite a good number of wins hovering between the 6x and 12x just with the symbols. Then there is the gameplay wilds feature which triggers randomly. Most of the times my wins stood around 7x. Having said that there were times I got nothing and others where I went over 25x.

I’ve seen this game featured in many casinos and I’m starting to understand why. It is a super-fun game that will put a smile on your face with its cheeky design. But it can also yield some very interesting wins with the possibility of the many wilds. It’s a slot that will keep both the novice and the veteran slot player content.

Play Bull in a China Shop for free

Browse casinos with Bull in a China Shop and other slots from Play'n GO. Create an account and try the game for free before making a deposit.

You can play Bull in a China Shop in English, Finnish, Swedish, German and 30 other languages. 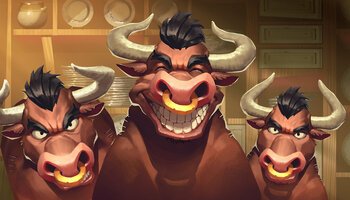