Burning Reels is one of the most energetic slots I have ever come across in my experience. I don't think anyone is able to play this game and remain cool-headed. The reason for this, a raging wildfire in the background and the visual effects on the reels, which are rather intense.

The game was released by Wazdan in 2017, and comes with a very exciting base game on five reels and 20 paylines. There is only one extra feature, however, a free spins bonus, which does offer a multiplier but that’s about it.

In my opinion, most players will be attracted to the unusual theme that has a real-life quality to it. The potential maximum win of 1250x may keep some players interested for longer than expected.

Wazdan has hit the x-factor with the graphics, making a slot that is lively and memorable. The wild and scatter symbols are firefighters moving against the background, encompassing a movie-like scene of a seriously mean bush fire.

As if online slots weren't exciting enough, the company has conjured up Burning Reels to mess with your neurons. Thankfully, the game takes small bets and I could just watch most of it burn in small wins and dead spins, so let's just say this one is not for the faint of heart.

Like most slots made by Wazdan, this game doesn't deviate from the norm of one bonus feature. Thankfully, the wild symbol is present during the bonus, as are the set of symbols that provide payouts with only two matching symbols. There are few other details that are worth noting.

I had the bonus trigger only once and it didn't go terribly bad. The small payouts with two symbols do occur and the wilds weren’t rare either, so I got a lot of back and forth, where the balance stays in limbo with barely noticeable drops.

In the long run, without a big win your bankroll will eventually dwindle out, so the only reasonable expectation to make it out alive from the fire is to get a good free spins bonus.

If you aren't familiar with games by Wazdan, I will shed some light on the paytable: it is the same across many of the games in this company's catalogue. The biggest payout in the Burning Reels slot is 250x, which can be achieved with five wilds. This is, however, a very rare occurrence for anyone to see all five land concurrently on a payline.

Four wilds on a payline sounds more reasonable and the payout isn't bad either, with 50x your bet. The values dance around quite freely between the rest of the symbols on the paytable and at all matching levels, which is what I really like about Wazdan games.

Out of all the symbols on the paytable there are four that can make payouts for two matching symbols, and these are the wild, the helicopter, the fire truck and the helmet. Their values are only 0.25 times the bet, except for the wild which pays 0.50x.

If the wild symbol is involved in a two-symbol winning outcome, the values of the payout increase to provide the following returns: the helmet pays 0.75x, the fire truck 1.25x, the helicopter 1.5x and the wild 4x.

The bets on Burning Reels start from as little as 10 p per spin, which is half a penny per payline. The highest possible bet is with £100.00. The theoretical return to player is 96.63%.

This is the type of online slot that can be enjoyed by the thrill-seekers out there. The game doesn't have a huge maximum payout at 1250x, but the theme may be enticing for some high-stakes players.

I don't think that I will play Burning Reels again anytime soon. Despite a paytable that is quite generous, a bigger multiplier potential in the bonus feature would have kept most players interested.

Another smudge on what is a perfectly engaging slot game is that the bonus spins can trigger only if the scatters stop from left to right. On a more positive note, the scatters pay any way.

Browse casinos with Burning Reels and other slots from Wazdan. Create an account and try the game for free before making a deposit.

You can play Burning Reels in English, German, French, Spanish and 6 other languages. 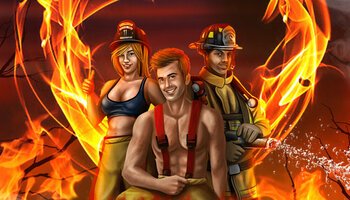