‘Caishen’s Arrival’, translating as ‘The God of Wealth’s Arrival’ is a 2019 release from the bods at Betsoft. As one might predict, this is another Chinese-themed slot aimed at appealing to the Chinese diaspora and lovers of East-Asian slots.

Jam-packed full of mythical creatures from times of old, Caishen’s Arrival leads us on a fairy-tale quest through a bygone age. Full of fabled characters and, of course, the chance to take down some tasty cash wins, Caishen has certainly arrived.

Okay, we get it - red symbolises prosperity in China but rarely makes for a good graphics choice. Red bleeds on screen and makes the game look like an explosion at a ketchup factory. It’s not the easiest colour on eyes to say the least, although the team at Betsoft has darkened the hues so it’s less retina-burning than most reds used in Chinese-themed slots.

Characters brought to us include something that wouldn’t look out of place in a dystopian cloning experiment gone wrong. The so-called Long Gui, a dragon/turtle hybrid is one of the more colourful ensemble players in Caishen’s arrival. Other supporting roles include a grumpy-looking bejewelled turtle and our protagonist Caishen himself. This East-Asian god is adorned in crimson robes and more gold than a mid-career international rap star.

The bed music is jaunty and fairly-authentic sounding, something you might hear if you walked into a convenience store in China. This is a welcome relief to the oft-heard woodwind or zither affectations that East-Asian slots often take.

The features of Caishen’s Arrival are a little sparse for a slot that alludes to abundance but while playing, you’ll hopefully encounter all of the following extras: Free Spins Scatters Wilds Stacked Wilds Re-spins

Caishen’s arrival sits comfortably alongside other Chinese-themed Betsoft titles such as Bamboo Rush, Dragon & Phoenix and the drop-dead-gorgeous Hong Bao from Kalamba Games. Caishen’s Arrival is one of the better Asian-themed titles, with more features and generally better graphics and gameplay than its contemporaries,

Free Spins are brought to us courtesy of the hong bao AKA lucky red envelopes symbols landing on the first and last reels on the 5x3 grid. At 10 Free Spins a pop, multiplied by 3 for every Free Spins round, you could soon be as bling as Caishen himself. It’s up to you if you choose to dress like a Chinese emperor or not.

With both auto and turbo play on offer, you can give your fingers a rest while you catch up on the latest edition of Corrie as you hopefully smash some juicy wins.

Symbol values, from highest to lowest, go like this:

As the production of Asian-themed slots continues to increase, as does the popularity among players. With no signs of slowing down, production will most certainly be ramped up to meet demand as Chinese new year fast approaches. You can almost hear the casino marketing managers rub their hands with spring festival-fuelled abandonment.

Caishen’s Arrival is a high volatility slot, popular among Chinese players looking to take down sizeable wins and enough swings to keep players glued to this 95.74% RTP game. Minimum bets begin at £0.05 and increase to £5, up to a maximum of £125 over 25 paylines.

The biggest wins are brought to us by the legendary long gui with a maximum of 400x when you land 5 on any given payline. Matching this payout-by-payout is the brocade purse symbol - gain another 400x of your original bet if you land 5 of these ornate money bags on the grid.

Most definitely one of the stronger Chinese-themed slots with a lot of care gone into the design and some solid features and decent gameplay. Without sounding too much like a pedant professor of East Asian culture, there are a few details that could have been better researched here. To bolster the authenticity of the game, for example, the character ‘福‘ displaying on the loading screen should be showing upside down, as is the tradition in Chinese culture.

Browse casinos with Caishen's Arrival and other slots from Betsoft. Create an account and try the game for free before making a deposit.

You can play Caishen's Arrival in English, Finnish, Swedish, German and 22 other languages. 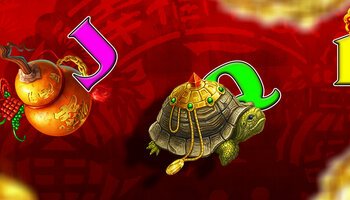