Cash Noire is a stylish slot from NetEnt. Published in 2020, the game places you in the shoes of the detective Tom Flint who has tried to solve the Green Ace murders for a while now.

Set in the time of the Great Depression, detective Tom Flint has come to a dead end. The city has lately seen a bunch of murders, or “the Green Ace murders”, as the media is calling them. The main suspect is only known for his nickname, Pit Viper. If you could just find out his true identity…

Then, one day, you find a surprise as you walk in your detective agency. A mysterious woman is sitting in the dark, claiming that she’s got some hard evidence with her. These clues just might be what you’ve been missing! Now, the next step is to connect the dots and follow the red thread. Pit Viper, you’re done!

Cash Noire is a truly beautiful and well-made game that combines the film noir kind of ambience with the excitement of a slot game. The slot has some familiar features, but it also introduces a fun way to collect clues and chase down the heinous man behind the murders. The game is definitely innovative and looks amazing, so in my opinion, Cash Noire is one of the best NetEnt games of 2020.

The main game is played while we’re inside the detective agency and in the company of the dame, who apparently prefers not to show her face too well. While the player is spinning the reels and collecting the clues she just sits on the desk, in the dark, and enjoys her cigarette.

Sometimes she moves a bit and changes her posture, but doesn’t react to wins or do any major movement. However, I think this is perfectly fine. We need to focus on catching the bad guy!

The free spins are more action-packed when the objective is to collect points on the map. The car advances on the map as you collect the winning symbols and move forward as per the number of the symbols.

Music is also very true to the theme and I love the additional thoughts the detective can say while the game is being played. These comments can be turned off, too, if you prefer just the musical ambience.

Cash Noire has five reels, four rows and 1,024 paylines going from left to right. The best possible wins in the game may be won through the free spins, where the winnings can have up to 10x multiplier.

This feature repeats itself until there are no more winning symbols.

If the Mystery symbol happens to stop inside the Crime zone it will clone itself inside that area before turning into another symbol.

The Crime zone draws a red mark around an area which, at the beginning of each new spin, covers three symbol spots. Every winning symbol inside that area is equivalent to a clue in the Clue list.

The zone can expand up to 5 symbol spots if the player manages to advance far enough in the Clue list.

During the City chase free spins, you drive through the city by following the points on a map. Advancing on the map works like the Clue list in the main game; any winning symbols landing in the Crime zone marks one point.

The last point on the map awards the player with a final multiplier, total of 10x. It also has 3 extra free spins. If you manage to get to this point it means you cracked the case!

I’m not usually a fan of slots that are low-volatile but I’ll happily make an exception on this very game. I do think that Cash Noire is one of the most innovative games from NetEnt in 2020. Although, it was probably doomed to be left in the shadow of Gonzo’s Quest Megaways which was released just a month after.

However, even though I do like playing Cash Noire and think it looks excellent, I also have some negative points. Like, triggering the free spins can be a very frustrating thing to do. It always seems that the winning symbols stop dropping when I’m only one or two clues from collecting all thirteen of them. To me, it looked like the Mystery symbols were the best hope for advancing on the Clue list fast enough - but they are also a rare sight.

Anyway, in the end, I still enjoyed this game a lot and would recommend checking it out.

Browse casinos with Cash Noire and other slots from NetEnt. Create an account and try the game for free before making a deposit.

You can play Cash Noire in English, Finnish, Swedish, German and 20 other languages. 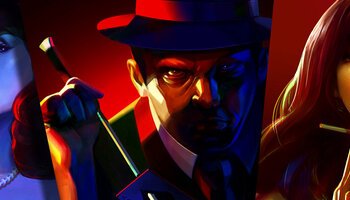