Cash Vandal brings us to the trainyard where we can express our artistic talents by spray painting the sides of trains. Meanwhile, the reels give us colossal wins, stacked wilds and more.

Developed by Play ‘n GO and released in 2019, Cash Vandal is one of their newest slots and it shows in a lot of ways. To begin with, the graphics are great. The setting of a trainyard with the side of the train on which the reels are spun is a great concept. The background shows us the skyline of different cities as we travel from place to place over the course of the game.

Speaking of reels, the game comes with a 4-reel, 3-row playing field. That’s right, this game only has 4 reels as opposed to the usual 3 or 5. This makes the possible win lines shorter but also makes it more likely a player can get a win. Even so, the game has a High Volatility because there are quite a few symbols in the game. It also only has 10 paylines.

When it comes to animations, Cash Vandals adds quite a lot of movement to the game. The Wilds especially are animated, spray cans that fill a reel with Wilds for example. The background slides past as the train starts to move, often before switching to another location. It is not too obvious but they do add some realism to the game.

The final thing to mention about the presentation is the music. The game has a calm but bass-heavy soundtrack playing in the background that really emphasises the graffiti setting. Wins are accentuated with brief jingles of rushing coins.

With its selection of symbols, the game leans into the style of the theme. The different images look like they were drawn by actual graffiti artists. The high-paying symbols are things related to money or the art, with stacks of bills, diamonds and gold bars. The low-paying symbols are fruits drawn in a way to look like they’re exploding. I liked the frenetic style and it helps set the mood.

The payouts for all the symbols are very low, mostly because the Wilds are rather frequent in the game and since it only has 4 reels this very quickly facilitates a win. The idea seems to be that there are frequent wins but only occasionally will you win enough to make back your bet. In my experience, this resulted in a slow decline in my funds, occasionally propped up by a bigger win through one of the special features.

Players can somewhat augment this by choosing a bet between £0.10 and £100 per spin.

Cash Vandal comes with a selection of features. Most of these features are either triggered or dependent on the Golden Spray Can. This Golden Spray Can only appear on reel 4 and has different effects depending on other symbols on the screen, or even the location the train is at.

The Golden Spray Can plays a major part in all the features. This symbol only appears on reel 4 and is augmented by other symbols on the screen. If there is no other special symbol on the other reels, the Golden Spray Can triggers a re-spin. This makes reel 4 sticky and can enable another feature to activate.

The normal Spray Can symbol acts as a Scatter and counts towards activating the Free Spins mode. If there is only 1 Spray Can on the screen, as well as the Golden Spray Can on reel 4, it activates the city’s special feature. The special features change depending on the city:

These features only activate for a single spin but in my experience would be quite beneficial. I especially liked the Colossal Symbols as they were often accompanied by Stacked Wilds on reel 4. This only left reel 3 to finish the win line.

The normal Spray Can symbol doesn’t have any special function on its own, except for granting a small win if there are at least 3 on the screen at the same time. This made them rather toothless since they required the Gold Spray Can to be worth anything to the player.

I thought the mechanics were pretty good and the features were fun but the requirements were quite hefty. I think this also contributed to the High Volatility since it’s rather difficult to get a bigger win this way. During my time playing, I found the game to grant small wins pretty frequently but these were often not enough to balance out the cost to spin.

Play ‘n GO proves with Cash Vandal that they still have some creative juices flowing through their organisation. The concept is great and I thought the implementation of graphics and sounds really helped in setting the mood.

Unfortunately, the features don’t really contribute to the overall gameplay and it makes for a highly volatile game that didn’t always feel like it was paying off. There are obviously players that will enjoy this type of slot and to them I heartily recommend it.

The features change depending on the city you’re in, plus the smaller size playing field creates some interesting variations to the classic gameplay most of us are used to.

Because of that, players that are looking for classic gameplay in their slot won’t find that here. The game isn’t a great departure from the standard slot but it changes enough for it to feel quite unique and unfamiliar which might be a turn-off for some players.

Browse casinos with Cash Vandal and other slots from Play'n GO. Create an account and try the game for free before making a deposit.

You can play Cash Vandal in English, Finnish, Swedish, German and 30 other languages. 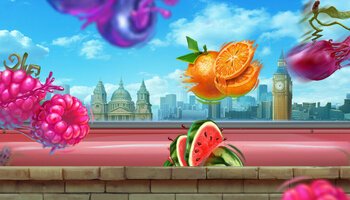