You have been chosen to compete in the most fierce of game shows with Cats and Cash. Will you be taking home the jackpot on the bonus wheel? Or maybe land some of the lucrative multipliers in the base game? Go for a spin on this 5-reel, 3-row slot with 15 paylines and discover what rewards are to be found around every corner.

Cats and Cash invites you to take centre stage as the protagonist of an exciting cat game show. There are bright lights, fortune wheels and gift picking waiting for every player. With an electrifying soundtrack and thrilling FX, you will feel like you’re in the middle of all the action.

As with other Play’N GO slots, you can expect amazing visuals and a fantastic user experience, even on mobile devices.

Each symbol has been meticulously designed to mirror the game show theme perfectly. Even the low-paying symbols are fantastically drawn. In fact, the lowest paying symbol is one of my favourite characters in the game. Kudos to Play’N GO to give each tile the attention it deserves.

The bonus symbol is a wheel of fortune. Three or more of these on a winning payline will activate the bonus. Here the assistant cat host will spin the wheel revealing the possible wins. Once the wheel stops, the number it lands on is your instant win.

Land on the orange segments with starts and apart from your win you are also awarded a respin on the wheel. There is a potential to win up to 333x your bet if all paylines are active.

Another tile within the game is the red box with a golden bow. Three or more of these on an active payline will activate another bonus round. Here you will have a total of 10 boxes presented to you with a maximum win of 133x your initial bet.

All you have to do is to select one of the boxes. This is put to one side whilst you reveal what the rest of the boxes contained. Once all boxes are revealed, then so is the one you chose with the amount added to your bankroll.

Before I started playing this game I thought it was going to be one of those girly slots which only appeal to women. But I was wrong. Play’N GO managed to strike a great balance with playful designs and fun characters, designing a game that appeals to everyone.

When it comes to the mechanics of the game I could feel this is a medium variance slot before actually looking for that information. There is a chance of a nice 667x win on the base game and even the bonus features come with decent potential wins of up to 300x.

I found the base game would give out some nice wins, especially when the multiplier wild was in play. These wins would range between 7x and 15x. But I also managed wins of up to 34x with the wild cat multiplier.

I have to admit I did miss some kind of free spins round within the game. But I did eventually have some fun with the Pick a Gift feature (although this is a very quick one) and the Wheel of Fortune.

Play Cats and Cash for free

Browse casinos with Cats and Cash and other slots from Play'n GO. Create an account and try the game for free before making a deposit.

You can play Cats and Cash in English, Finnish, Swedish, German and 30 other languages. 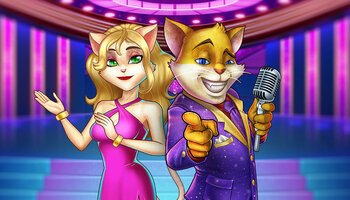 There was something catchy in this game. Felt little bit glamour and cartoons mixed up and gameplay was quite nice. Game design is probably the best part of the slot. Got one time the bonus game and it was nice. No any stacked wilds or things like that but still I pretty much enjoyed this one!