Celebration of Wealth is the third slot in Play ‘n GOs Wealth series. This game celebrates the superstitions and beliefs surrounding good luck and chance in Asia. Aiding this are features including 243 Ways To Win, Free Spins and 4 jackpots.

This slot was released in 2020 to coincide with the other 2 Wealth slots: Beast of Wealth and Temple of Wealth. Out of the 3, Celebration of Wealth is definitely the most whimsical as it used different cartoon characters to fill the 5-reel, 3-row playing field. Just like the other slots, it has 243 Ways To Win and it also features 4 jackpots that the player can potentially win.

The graphics are great, with a lot of detail and fun animations. The originality does take a hit considering the rather tried theme, but I feel that the designers took some extra steps to at least have some of the symbols stand out. Meanwhile, the other symbols blend together in terms of originality. The colour scheme is very bright, and whenever there is a win the symbols involved play a brief animation.

When it comes to the sound, you shouldn’t be surprised that it fits in the category of decent but standard. The sound is clear and the fact the music plays a song performed by a band shows that they put effort into it. Unfortunately, the music is also entirely within what people would expect from an Asian-based slot.

Celebration of Wealth has a number of different symbols, divided into high- and low-paying symbols. While the high-paying ones are original and remarkably detailed, the low-paying symbols are simple card letters that don’t attempt to stand out at all. They look good but boring and don’t add to the theme. This is common amongst most video slots out today, however.

The game features 4 jackpots that range from mini to grand, augmented by the bet value per spin. Just like in other Play ‘n GO slots, players can pick a bet between £0.10 and £100 per spin. The max. win is 5,000x your bet, which is also exactly the same as the other slots in the Wealth series.

The features in Celebration of Wealth are exactly the same as those in Beast of Wealth and only slightly different from Temple of Wealth. Players can expect select features to be active during the base game and a different set during the free spins mode.

If you’re at all familiar with any of these features you won’t be introduced to any surprising variations here. They operate exactly as they do in other games. I think the Golden Reels feature is something that’s unique to Play ‘n GO and might require some extra explanation.

The Golden Reels feature activates randomly and only during the base game. There can be 1 or more reels replaced with the Golden Reels, giving them a golden border. If a Wild lands into any of the Golden Reels, the jackpot is triggered. To decide which one the player receives, they are presented with 12 cards.

Players are then tasked with flipping the cards until they have 3 of the same set. Once that happens, they receive that jackpot. Even though they’re called jackpots, be aware that they aren’t instantly very big. The Mini jackpot awards a 10x win, while the Minor jackpot awards a 25x win. During my time playing, I wasn’t successful in triggering either the Major or Grand jackpots.

The Free Spins mode is activated with 3 or more Scatter Symbols appear on the screen. Before the mode starts, players can pick the size of the playing field. The bigger the playing field, the more ways to win but also the fewer free spins they get to play with.

I found the features to be a nice addition but they didn’t feel very important to the overall gameplay. Getting the jackpots was also not a huge deal since the smaller jackpots award something you could win organically as well.

Celebration of Wealth is definitely the most whimsical of the 3 Wealth slots that Play ‘n GO released. They are all largely the same in terms of gameplay, with only small variations in the features to make a difference other than the looks. All 3 are based on Asian culture which does limit their appeal somewhat, but even in that case, I think Celebration of Wealth wins by not just doing exactly what one would expect.

Players that enjoy a steady, measured out experience where all the features more or less show up frequently will get something out of this game. None of the features I would call exciting or especially interesting but they do what they are supposed to do.

In general, players will have a good time while playing Celebration of Wealth because it offers a standard experience. It depends on your personal preferences to determine how long you will keep playing. I don’t think many players will enjoy this game for a long time, but it is a suitable slot to pass a few hours with.

Play Celebration of Wealth for free

Browse casinos with Celebration of Wealth and other slots from Play'n GO. Create an account and try the game for free before making a deposit.

You can play Celebration of Wealth in English, Finnish, Swedish, German and 30 other languages. 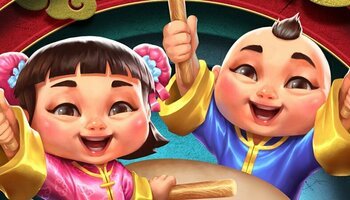