Charlie Chance and the Curse of Cleopatra slot review

Play Charlie Chance and the Curse of Cleopatra

Charlie Chance and the Curse of Cleopatra brings us back into contact with Charlie Chance. This intrepid adventurer first explored Hell and now he’s in Egypt. Both he and the player have to deal with the cluster pays mechanic, cascading reels and free spins.

Just like the other Charlie Chance slots is this one developed by Play ‘n GO. The game was released in 2021, making it one of their latest slots. This definitely shows as we can instantly see the high quality of the design. Just like the previous Charlie Chance games, this game relies heavily on the Steamboat Willie aesthetic of the 1920s. This style is carried through in the character design but not as much in the slot as a whole.

The game itself is built around a 6-reel, 6-row playing field. The way to get wins is not through paylines but with clusters of 5 symbols or more. Several features included with the game help facilitate these groupings. The design of the game is clearly set in Egypt and besides the unique character design, it doesn’t really go overboard in originality.

As with the previous games, the sound design is on point. For once, the Egyptian setting doesn’t completely overwhelm the music but we are treated to something original. If a player would only hear the sounds they probably wouldn’t guess the theme of the slot. It does still evoke a sense of adventure in a foreign setting, so that does enhance the experience.

Charlie Chance and the Curse of Cleopatra makes use of a selection of rather standard symbols. This means that they borrow heavily from the Egyptian setting, but they are all original creations specifically for this slot. That always wins points with me, simply because it shows a modicum of creativity. Even though the Egyptian theme has been done to death, there are some original designs like the Charlie Chance Wild and the Cleopatra Scatter.

The game itself is built around its Medium Volatility that grants players average wins relatively often. As a result, the slot feels extremely steady. Even after playing for more than 2 hours I still had roughly the same funds as when I started. The RTP of 96.25% is also a little above average from similar slots. This makes the game ideal for people who enjoy playing for a long time without necessarily looking for big wins or quick losses.

Players can change how much they bet per spin. The game allows you to pick a bet between £0.20 and £100 per spin. The higher the bet the bigger the potential payout, but it will also drain your funds faster. There is a maximum win of 5,500x your bet. This is about average for games with high volatility but a lot higher than most slots with medium volatility.

The game has a number of different symbols:

Charlie Chance and the Curse of Cleopatra brings a nice mix of features into the game without becoming overwhelming. There are some features that appear every spin and there are others that are more reserved.

First, a quick look at the features themselves:

The game takes place mostly in the base game as I found the free spins hard to activate. I only saw it trigger twice. Even when it did activate, the effectiveness was questionable. Both times I got about 50x my bet out of it, bringing my funds back to their original starting point. Obviously, your mileage may vary.

The main game does have a lot of things going for it. Every spin has two matched reels next to each other that will have the same symbols on either reel. This makes it easier to get a cluster. There is the Charlie Chance wild that can appear on the same reels as well. Since a cluster counts when it’s 5 or more matching symbols and the colossal wild is 4 symbols big, this means you are guaranteed a number of wins.

Charlie Chance and the Curse of Cleopatra shows us that Play ‘n GO definitely has a handle on this style of animation. Cleopatra is shown dancing on the screen at all times in the familiar style. The other elements within the slot work well together with this design choice. I also appreciated that the music wasn’t the same boring Egyptian style we’re so accustomed to.

The gameplay feels solid and varied enough to keep someone interested. There are a number of features that are pretty rare, such as the Matched Reels and the Serpent’s Trail. I wouldn’t say they are my favourite features ever but they hold the player’s attention.

You will probably not like this game as much if you are looking for big wins. The volatility is very tightly calibrated to slowly but surely leech your funds, with only a few times that you can make your money back. Do you prefer to simply play a game for a long time and enjoy the slot? Then this will likely be a perfect fit.

Play Charlie Chance and the Curse of Cleopatra for free

Browse casinos with Charlie Chance and the Curse of Cleopatra and other slots from Play'n GO. Create an account and try the game for free before making a deposit.

You can play Charlie Chance and the Curse of Cleopatra in English, Finnish, Swedish, German and 30 other languages. 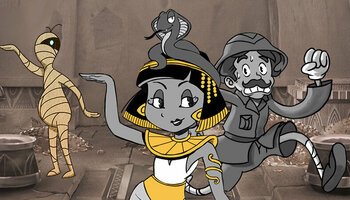