Charlie’s luck ran out and now he’s facing the Devil herself. It’s time to pay, but can Charlie turn his luck around.

Play’n GO released Charlie Chance in Hell to Pay in the late spring of 2020, and it immediately caught the attention of players. This game was something that was never seen before.

The first thing that caught people’s eyes was the visuals. The game is made as a homage to ‘20s and ‘30s cartoons, especially to Fleischer Studio’s and Disney’s old classics. You instantly get the feel of Betty Boop, Popeye or Ko-Ko the Clown. My guess is, that the massive success of the Cuphead video game was also a factor in this style choice.

Apart from the visuals, the game itself is a nod to the classic fruit machines. Charlie Chance is a three-reel slot with just five paylines and the symbols feature classic imagery.

When I first saw Charlie Chance in Hell to Pay on a casino, I just had to try it. I just love this style of animation and I was not disappointed. This game was something else, this was a gem of a game.

Charlie Chance in Hell to Pay is a beautiful game that took its style from the early days of cartoons. They didn’t just slap on a picture and call it a day but went all out with the animation. Play’n GO did an amazing job with this slot.

All the characters are lively and animated exactly like they would have been back in the day. Even the little demons in the background move constantly and bring the game to life. This isn’t just some cheap 3D animated characters, but proper 2D animation.

The music starts up slowly and builds up as the game goes on. The subtle start turns to proper swing when you start winning and especially when you the Feature Board. The sound effects are also well done and everything fits like a glove.

The symbols in Charlie Chance are old-fashioned, but with a devilish twist. Instead of bells, you get hell’s bells and instead of sevens, you get three sixes. There are also bar symbol, lemons, grapes, cherries and apples.

There is a single special symbol in the game, the wild. Some of the wilds have a multiplier attached to them, and they will give either double or triple wins for that payline.

Every symbol in the game can have a little flaming Devil in the corner, which is the scatter symbol. If you get three of them anywhere, you activate the Feature Board bonus feature. The Devil will start to roast Charlie and the poor guy starts to move away from the rising flames. Charlie will land on a random bonus symbol at the bottom of the screen and activate that feature. You can get cash, free spins, re-spins or even a guaranteed Win Spin.

If you get three scatter symbols on the reels, you activate the Feature Board. The Devil starts to roast Charlie and the poor guy is hopping away from the flames. Charlie is walking along the possible features that can activate and when the flames die down, Charlie will stop at one of them. That feature is then activated and played out. It is possible to restart the Feature Board while a feature is active.

If Charlie lands on the Instant Prize, you will simply get a cash prize. What you get is random, but it can be as high as 10x your wager.

Landing on the Free Spins will give you, no surprise here, free spins. You get eight spins, during which you can restart the Feature Board. You now collect each scatter symbol and for every three you get, Charlie is getting roasted again. New features will be played in-between the free spins.

The Win Spin feature is as simple as it sounds. You spin the reels once and you will get a win. The entire middle reel is wild and the others will nudge until you get a win.

The Wild Re-spin will give you one free re-spin. At the start of that spin, anything between one and nine wilds are added to the reels. These wilds can have multipliers on them if you are lucky.

The Multiplier Re-spin will let you re-spin the reels, but this time with a multiplier. Before the spin, you will get a random multiplier for all the paylines. It can be 2x, 3x or 25x.

I simply adore this game. This is everything that I love in a slot. The visuals, the sounds, the pay structure, the special features, the volatility and so on. I just can’t stop praising this slot.

Charlie Chance in Hell to Pay is a unique experience and a one that probably will not get a cheap knock-off. There is not going to be a Jungle Jim for this Gonzo.

One big thing apart, of course, the theme, is the medium volatility combined with a nice RTP and often activating Feature board. This means that you can get a steady stream of decent wins. I did not get massive dry spells and my bankroll was never draining out. I was never just losing my money but felt like I had a chance to get something out of it without hitting a jackpot.

Play Charlie Chance in Hell to Pay for free

Browse casinos with Charlie Chance in Hell to Pay and other slots from Play'n GO. Create an account and try the game for free before making a deposit.

You can play Charlie Chance in Hell to Pay in English, Finnish, Swedish, German and 31 other languages. 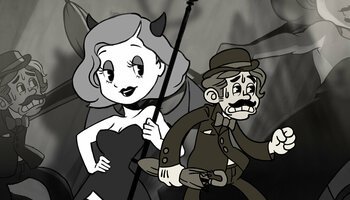