Chibeasties 2 explores the mythical life of the Chibeasties, using special crystals to switch between worlds and bonuses. As a big fan of the original Chibeasties, I was excited to revisit that world!

The name Chibeasties applies to the special race of creatures that fill this Yggdrasil slot. They are ridiculously cute with big eyes and chubby limbs. Chibeasties 2 came out in 2018 and is obviously the second game that incorporates these sweet little animals. With 5 reels and 20-paylines it promises a satisfying classic experience.

In many ways, this slot is simply an improved version of the first game. The graphics are better, the soundtrack sounds nicer and there are more features. It also means that if you are a fan of the original slot like me, you’ll more than likely enjoy the sequel!

Starting up the game I was treated with a beautiful intro, showing off the core idea of the game. Both the Chibeasties and I can freely switch between different worlds. Depending on the world the Wild mechanics changed, from Expanding Wilds to Random Wilds and more.

Putting Chibeasties and Chibeasties 2 next to each other it’s easy to tell the massive graphical improvements that were made. While the original game looks pretty flat and simple, Chibeasties 2 has beautifully detailed graphics. From the subtly animated background to the different symbols, everything looks lush and crisp.

Chibeasties 2 also has a new soundtrack, a suiting mythical ambience that plays in the background while wins evoke a short ramping up victory tune. If one of the Chibeasties is on the winning payline they let out a quick satisfying hum or cheer. I found myself regularly smiling at the cute sounds these animals make.

Yggdrasil pulled out all the stops when it designed Chibeasties 2 and it shows in the symbols they use. Each of them is easily distinguishable and comes with little animations.

One fun thing that I noticed is that when any mushrooms are on a payline they come to life. Apparently, in the Chibeasties world, the Mushrooms are animals too! It’s this kind of detail that always draws me into a game the most.

So far so good, but as I mentioned before the player can freely switch between 4 different worlds in Chibeasties 2. Each world massively affects the way the Wilds work:

It became a challenge for me to try and find which world helped the most in getting big wins. Honestly, they all seemed to even out pretty closely, each having their advantages. I liked this concept because it lets players experiment with what works best without making things too complicated. After trying each world and its Wilds I understood how they worked.

Chibeasties 2 is a worthy sequel to the original, improving the game in substantial ways without making it a completely new experience. They kept the animal design similar and made them even cuter!

The game let me set my bets between £0.20 and £100 per spin. Coupled with its Medium Volatility and a maximum win of 900x the bet it is a slot that offers a steady stream of reasonable wins with the occasional outlier.

The Wilds show up regularly and the ability to choose what type of Wilds they are was really fun. I would switch between worlds and Wilds every couple of spins to make sure that I was maximizing my wins.

I found Chibeasties 2 to be an excellent example of a sequel done right. It kept the original theme and setting that I liked so much intact while adding some welcome changes and additions. The graphics especially are amazing. Here’s hoping for a Chibeasties 3!

Browse casinos with Chibeasties 2 and other slots from Yggdrasil. Create an account and try the game for free before making a deposit.

You can play Chibeasties 2 in English, Finnish, Swedish, German and 18 other languages. 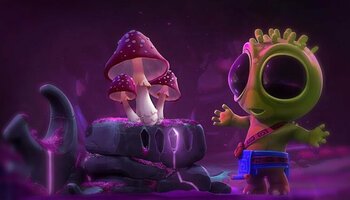