ChilliPop is a spicy Betsoft slot that combines Mexican culture with a plethora of vegetables to create a very tasty game! I think this whimsical slot does a lot of things extremely well.

Released in 2018, ChilliPop is still new and it shows. The game really jumps off the screen with the whimsical character symbols and the fitting background. We find ourselves in a dusty Mexican town in the middle of summer while on the playing field a total of 10 different symbols drop down and spice up the screen.

Even though I’m fairly sure that ChilliPop is Betsoft’s first foray into this interesting new gameplay mechanic, other developers have done it before! Play ‘n’ Go has several games like this, most famously Gemix and Energoonz. Although those are different variations of the same idea and I didn’t find them to be that much better than ChilliPop.

This Medium Volatility game does not work with traditional paylines. Instead, it uses clusters to generate wins. When you get 3 or more of the same symbols together in clusters, they pay out a win before exploding. After they explode new symbols drop down to fill up the empty spaces, possibly creating new clusters. I thought this was an interesting mechanic for a slot and as someone who likes original approaches, it definitely worked for me.

This all happens with very characteristic looking symbols. If you’ve ever seen the different Minions movies, you’ll have a good idea of what the symbols in ChilliPop look like. Big eyes, small bodies and huge grins. Personally I prefer hand-drawn symbols but these 3D-rendered ones still look great.

In my experience with Betsoft slots, the music is always a strong suit of any game they make, and with ChilliPop that’s no different. The game boasts an energetic, positive tune that fit the Mexican setting very well. Paylines reward us with a quick trumpet solo to emphasise our success.

As a first impression, ChilliPop might not look like my cup of tea but it was the gameplay that really hooked me in.

As I mentioned before, the symbols in this game are all themed around Mexico and its food. Each of them is their own little character. Most of them were easily distinguishable for me except the red pepper and the tomato, which are both pure red. I think they looked nice enough but also lacked some originality. Then again, in a slot about food, you are kind of limited in what to show!

Unlike slots with classic paylines, you don’t get coins based on the number of symbols on that payline. Instead, ChilliPop counts the number of symbols you have in a cluster to determine your win. That meant being able to quickly tell if the different symbols were clustered together helped in seeing if I had a good spin.

The different symbols in the game are, from highest to lowest:

I really like the way the game counts different wins. Especially if you have a bunch of clusters, the game goes over each of them in turn, showing the amount you win per cluster and leaving it on the screen until it has processed all the winning clusters. That way you can see the numbers going up before the total sum is shown.

If the cluster wins and the cascading reels aren't enough, ChilliPop also boasts a Free Spins phase! Before I dive into that, I’ll summarise all the features for clarity’s sake:

Phew! As daunting as this might look, it was actually introduced very well. Most of these things become obvious from simply playing it for a few spins. The Buy Feature is clearly marked and gives you an ‘Are you sure’ screen before you commit, in case you only clicked on it to see what it does.

I’m going to move on to the Free Spins phase though because that’ll also require me to explain some things. In my time playing slots, I don’t think I’ve ever seen it play the way it does in ChilliPop, but I enjoyed it greatly.

Once you get 3 or more Donkeys on a single spin in the base game, or you use the Buy Feature to trigger it manually, you activate the Free Spins phase. This part starts as it normally does, but there is an added tracker on the left side of the screen.

This tracker counts the number of Donkeys you get while playing the Free Spins phase. While in other slots Free Spins symbols in this phase mean additional Free Spins, here it does something else. The more Donkeys you gather, the bigger the playing field gets.

Considering ChilliPop works with clusters and not paylines, I’ll let you imagine how an 8x8 playing field helps in getting winning clusters. I was honestly blown away by how lucrative the Free Spins phase could be. As I was playing I would regularly use the Buy Feature to play the Free Spins phase with 10 Free Spins as that was usually more than I’d get from organically getting into this phase.

Do keep in mind that the Buy Feature has an upfront cost, which means you have to earn that back before you start actually winning. But with 10 free spins, I had plenty of time to gather enough Donkeys to really grow the playing field and reap the benefits.

Compared to other Mexican themed slots like Red Tiger’s Esqueleto Mariachi, ChilliPop lags a little in terms of design. I really enjoy the classic Mexican visuals that the other slot has, while ChilliPop settled for a more Western design. The lack of animations also feels like it’s missing out on some extra character.

The gameplay more than makes up for it though. I thoroughly enjoyed ChilliPop and it might have been the most fun I’ve had playing a slot in a while. The game is not for people that only enjoy the classic slot experience since it strays pretty far from it.

If you don’t mind that, I would heartily recommend you give this slot a try. The Free Spins phase can quickly escalate, almost doubling the playing field and continuously adding more and more clusters to the screen. With the ability to choose bets between £0.50 and £50 per spin you can start off easy and ramp it up slowly if you’re so inclined.

I had a great time playing this game. It looks light and fun and it plays the same way. The pace is quick which I’m always a fan of. The cluster mechanic is an original approach to the way you win and I have to be honest, it is a nice change from the usual paylines. The way the Free Spins phase works still makes my jaw drop even though I’ve played it regularly over the last few years.

Now if you’ll excuse me, I have some more rounds to play!

Browse casinos with ChilliPop and other slots from Betsoft. Create an account and try the game for free before making a deposit.

You can play ChilliPop in English, Finnish, Swedish, German and 22 other languages. 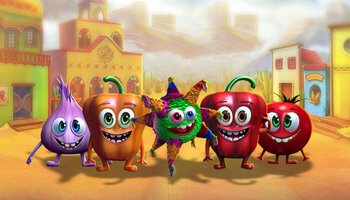