Chimney Sweep took a look at the old Victorian job of sweeping chimneys, usually done by children, and decided this would make a great topic for a slot! With multipliers, wilds and free spins the game does its best to hook us in.

When Endorphina released Chimney Sweep in 2014 I remember thinking it was an odd setting. Looking at the design of the slot it was apparent they both took it seriously and used classic novels and films as a source of inspiration, and not the actual work which involved injury and child labour. The 5-reel, 3-row playing field is thus filled with colourful animals and pretty animations.

The game offers players a game that has 10 paylines with a High Volatility, and it is nice that the symbols are animated whenever the symbols are part of a win. Unfortunately, most of the symbols are big card letters. They are made to look the part but I did find it annoying how much room they take up and how much more of them appear on the screen during any given win compared to the much nicer looking high-paying symbols.

When it comes to the sound, the developers decided to play it safe and went for no music at all except during certain wins. It has a whimsical nature to it that I liked but that would bring up the problem I have with the slot, where there’s a disconnect between the look and feel of the slot, and the dark undertones.

Chimney Sweep is a slot that has a confusing theme where the symbols are colourful and cute-looking while at the same time covering a rather dark topic. I suppose that it’s not meant to be taught about too much and instead just act as a simple backdrop for the game.

Players can experience the slot by changing their bet between £0.10 and £100 per spin. I would recommend players start off with their bets quite low before ramping it up, as it does have high volatility and I found the wins to be spaced out quite considerably.

The symbols you’ll find in Chimney Sweep are:

The game’s volatility came to the forefront a lot, with dozens of spins not granting a single win before suddenly triggering a big one. This was even without the free spins mode activating. Players who enjoy slots that grant wins at a reasonable pace won’t find that here.

Chimney Sweep keeps things sweet and simple with regards to the features. The slot has a few standard ones that most players will have seen before. The gameplay, as a result, also stays mostly the same. Not that it’s a bad thing, but people won’t face any surprises when they start up this slot for the first time.

The features individually aren’t hugely impactful on the gameplay, as they don’t appear frequently enough to really contribute to anything much. The wilds are rather rare and would often not be part of a win anyway. Meanwhile, the multipliers are gated behind special circumstances.

However, when combined these features work quite well. Having a 2x multiplier applied to all wins with a Wild makes the high volatility a little more palpable. They don’t happen very often, but since the symbols, all have high coin values even a three-of-a-kind win can be a big increase in funds.

In the same way, the free spins mode acts like a spike. The gameplay during this mode isn’t changed at all with the wilds appearing as frequently as during the base game. This means it’s never certain this will pay off, but when it does you can expect a good amount of coins. With the 3x multiplier to all wins, the free spins mode has the potential for really paying off.

All in all, I thought the features were an interesting addition to the gameplay but the volatility was really punishing. Even though I started off with some bigger wins I quickly found my funds draining almost exclusively.

Chimney Sweep is an odd slot with a confusing theme but nice graphics and alright gameplay. The features that are part of the game will be familiar to most people that have any experience with slots which means it’s easy to get started.

Players can enjoy the high volatility if the understand just how high it is. It’s not that there are no wins but the ones that do appear are infrequent and often not very high except in exceptional cases.

The game is really made for phone users with the game being extremely annoying to play on the desktop computer since it keeps going fullscreen whenever you want to press a button. Having the game on autoplay will therefore still take up all your attention.

Browse casinos with Chimney Sweep and other slots from Endorphina. Create an account and try the game for free before making a deposit.

You can play Chimney Sweep in English 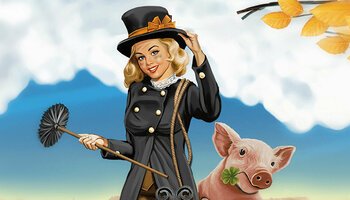